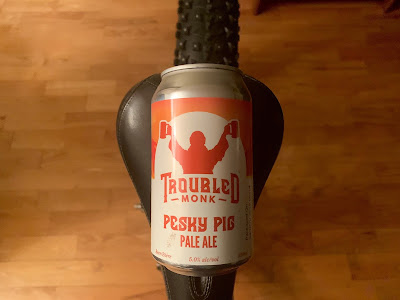 Well here we are on a Monday evening doing a beer review. My transition from nights to days seems to be on its usual destructive course. I really thought a bike ride to kick things off was a smart idea but as the days went on fatigue and slothfulness set in quite heavily. What are we? Two bike rides in? With today a bust and tomorrow looking the same that might leave this at three rides for the set off. Pretty much par for the course for night recovery. I did have a ride attempt in Fort Saskatchewan which would have probably fixed things but I was dead tired. That and the drop in by the tennis courts showed very little traffic on the trails which had me a bit perplexed... "Was nobody riding Fort Saskatchewan anymore? Or do people all avoid the hard parts and just ride the boat launch westward and back?" I already knew the answer sadly...

That ride was cancelled as I could have fought the snow and rode on but the fatigue had won and I knew that ride was a no go. I did some things in town and stopped at the boat launch to see plenty of fat bike tracks from the parking lot heading west.. Sigh.. "not sure what is wrong with people now.." I mumbled to myself. A post on the local Facebook forums asking why people don't ride from the tennis courts anymore warranted no answers.

Please no... Don't think I'm some sort of hardcore wannabe who is upset cause people don't ride the harder trails. It really isn't that harder than the rest. Maybe a few hike a bike sections take place now but... I mean.. The whole out and back is 15km of relatively easy riding. Why are people cutting that in half now?

I'm sorry. I'm grumpy. Apologies to Troubled Monk as I made their beer review all about me in true millennial form. Shall we just review this one now?

Troubled Monk from Red Deer gets the last review since last Summer when a large tasters flat was delivered as a gift. The pour was nice, a murky golden beer filled the tester glass with a two fingered head that lurked once it was fully dissipated. A nice craft beer smell resonated up the nostrils. Citrus is a notable one with oranges and grapefruit leading the charge.

I sipped and was pleased. This one has the usual craft beer feels as you put this up to the lips and partake. Tastes of citrus not surprisingly hit you. Some leafy goodness hits you as well with the malt delivering in a big way. This is a very nice drinking beer with each sip giving you copious amounts of flavours. 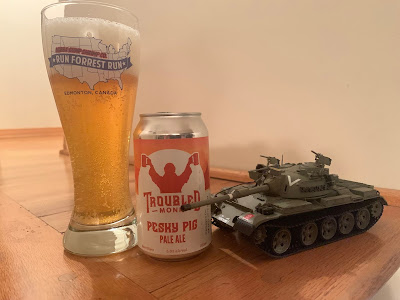