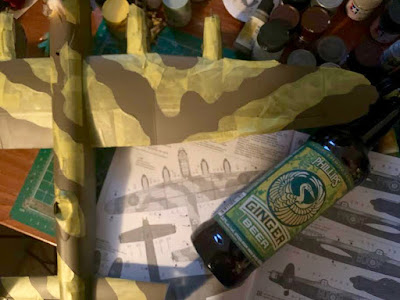 Welcome back to Beer Friday kids. How ya doing? You doing good? Are you missing your cubicles  yet? You all working this week or being good samaritans and staying home? I have seen a number of social media posts with people bragging about being essential and working which makes me feel more of a loser for being a fellow human and breathing the same air as these people.

With days off just starting I decided to hide at home. Rides are planned for the next week but things will change rapidly if there are a bunch of knuckle dragging gym and mall morons clogging up the valley. Yes, there are areas remote and quiet but you do have to go through the busy spots to get to them.

Today's review comes from Phillips Brewing in Victoria, British Columbia. A brewery that has had a few appearances on Beer Friday before and have always fared well.

Yes I was right, their previous reviews scored quite well. That brings me to this. Ginger beer. A definite hard no from me if I was out. This one was donated a while back and has been staring at me in the Lonebiker den for a long time, it's cold ice stare burned holes into my forehead today as I worked on my cool plastic models all day. I dispatched some interns to get it cooled and summoned the beer review team for tonight.

We poured and the beer gave us a solid two and a half fingered head. The pour was beautiful and despite the crazy goings on as of late it gave us some hope for the future.

Before we begin, a note on ginger beer. This shit is not for everybody, I've had ginger beers before and they are a challenge. If you love ginger ale let it be know this doesn't even come close to tasting like that. This is a serious acquired taste and unless you drool profusely at the thought of tasting strong ginger I would stay away. For myself, ginger is kinda meh but I will be as fair as possible in this. Why I even promised the beer gods I would!

The smell was not surprisingly heavy with ginger. Trying to detect other notes on smell was quite hard as the ginger seemed to overwhelm everything. We tasted it and again were overwhelmed with the ginger taste. It was really hard to detect anything else. I'm not too sure in how breweries are supposed to make a decent ginger beer and not having the ginger bee all so powerful but I can only assume that crazy notion.

Apologies to Phillips as I can't do this properly. The ginger is insane in this one and honestly is hard to drink. I am being a trooper and finishing it though. Yes the entire 650 mml bottle (shudder.)

To finish, if you love ginger pick this up. Not sure why it has to be so strong. I think this would be great if you were down with some sort of flu. I remember my parents would always give me ginger ale but this one has alcohol in it. Win win bitches. 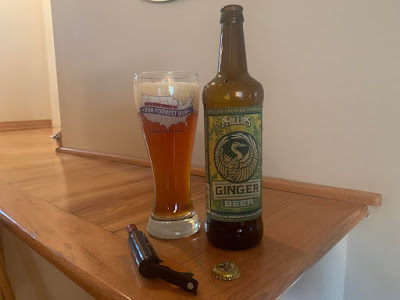