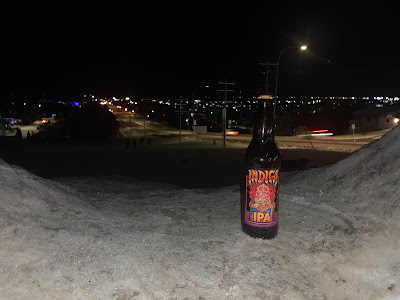 As we are now steam rolling into another Christmas I am happy to report that the staff over here at Lonebiker have all received their Christmas bonuses, a complimentary exclusive one hour fire log dvd and some peanuts.

I think I mentioned on a music post about my poor night to day recovery happening right now. For some reason I am still waking up at four in the morning. Wide awake. If I try to keep sleeping sometimes it works but will get up at about eight and feel like a bag of shit all day. That is what happened today and yesterday. My job pays quite well but I really do question whether I should keep doing it or not.  Trying to have some sort of an active lifestyle is quite arduous at times.

Lost Coast brewing is located in Eureka California. Where the hell is that? I have no idea... As a true Canadian who honestly gives zero fucks about California so that I can pull up a map and see how close it is to Los Angeles. Home of Hollywood drek and pretentious douchebags driving Escalades and BMW's holding Starbucks and small dogs. Is the small dog in your purse still a thing or have they moved on to a new fad now?

Eureka is nowhere near L.A making me like it. Northern California is supposed to be quite amaze from what I heard, so need not be offended. Unless you're from L.A.

The pour went well and Timmy the intern had a heart tremor witnessing a pour for the first time. A proud three and a half fingered head stood boldly on top. It dissipated in a respectable time and some very light traces of lacing followed the glass down. It smelled of mild pine needles with a citrus underlay.

This is one of the nicest IPA's that I have had in a while. A faint bitterness to this one yet it still retains some good IPA qualities. It takes after the smell and a citrus and pine taste, Caramel is in the mix as well. This is one hell of a well put together india pale ale. I saw angels when I was drinking this. Oh wait... No I didn't, but it's still pretty good. 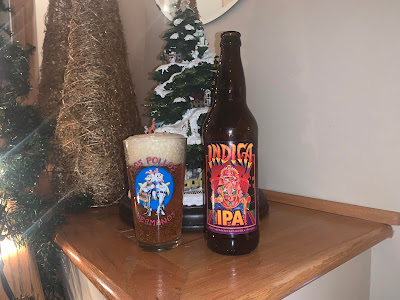