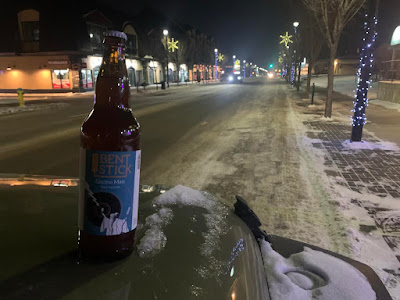 To say that things have been easy the last couple of days since returning off of nights would be a bit stretch of the truth.

You see, I feel a little bit like I am on death's doorstep. In fact I swear I did see death a couple of times around the house today as I stumbled by clutching onto my french press. Sickle in hand. Hood on and up with a dark empty face. Would death want to look any other way?

Maybe I am just the biggest bitch on this side of Alberta. A guy who's been in the trades his whole life and cannot for the life of him recover from a week of nights..

How does Mrs Lonebiker love such a thing?

I think I made my case for lack of rides. I did try for today but it was hopeless, in fact the first time I saw death was when I went downstairs to have a look at the bike. He was hiding behind the old fridge that crafty bugger. I threw my cold coffee at him and scared away for a bit.

Today's beer comes from Bent Stick Brewing in Edmonton! <That exclamation point is because I had no idea where they were from. Well you see genius... "Bent Stick brewing?' That name never clued in that they might be Canadian? Well they are and they are local. Hold on... I gotta go check out their website.

Well that was fun. It was started by four buddies and I could not help to think of their friendship lasting through this business venture. I really do wish them the best but some of the stress of running a business could definitely change things. Let's hope it doesn't and of course a bad beer review could prove cataclysmic.

A dark dirty golden beer filled up the Hardcore Bikes beer mug to near perfect completion. A stray poured down the side in a sexy beer like way making the moment even more incredible and at that exact moment two interns could not take it anymore and their heads exploded. These lonebiker beer reviews sure are dangerous kids.

A smell of mild wheat hops fill in the nostrils as well as citrus, dried corn and wet dirt or we could just say "earthy."

The first sip was quite delightful. A nice and easy IPA that does not murder you with hops. Now as you'll see from the start of this post I can be a bit of a pussy sometimes and I am not a fan of those heavy hops. This one is a very easy drinking beer with tastes of Toffifee, caramel and grapefruit which seems most dominant but it's that acidity citrus that is what it seems to give this one that epic IPA taste that doesn't give you bitter beer face. You remember bitter beer face? 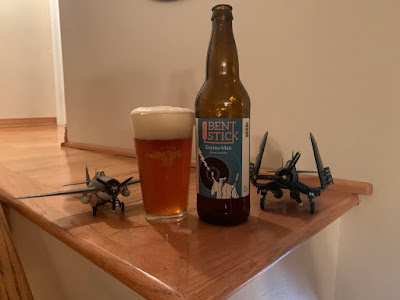