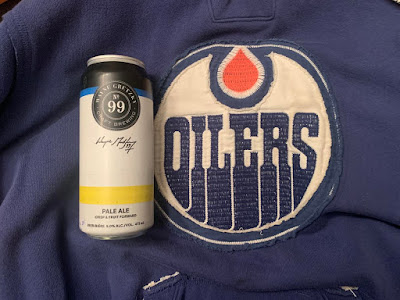 It was last week when we learned of the sad passing of the most legendary Canadian Father that has ever walked this great land. Walter Gretzky, father of...

Hold on, I'll let you guess.

If you are Canadian and cannot guess, I hope you tumble down a flight of... Wait a minute. That would never happen. Every Canadian knows.

Wayne Gretzky brewing became a division of Wayne Gretzky winery in the Niagara area of Canada. I am not too sure on the timeline or how long they have been around. What impressed me quite strongly is Wayne didn't pass this off to some other brewery and said 'make this.' Instead he made his own brewery and did it himself.

Well... He probably hired a bunch of people but still. He went a lot further than most celebrities who have their own beers made after them. I am sure there are magazine articles written about this and probably some sort of piece done by some sort of travel show which would tell you all the information on how this started. knowing Wayne Gretzky I would bet he is a huge part in this winery and brewery and puts a lot of hard work into it.

It was time to pour and a nervous and oddly overzealous beer pourer poured too fast and an unnecessary large 6 finger head appeared. The beer pourer, Ingred a faithful five year employee was quickly shown the door. We don't take too kindly to imperfection over at Lonebiker headquarters. Except for the grammar and editing on here of course.

Once the beer settled down we took the pic and settled in for a tasting session. A smell of fruits, some citrus and apricot with toffifee to round things out hit our nose senses like Dave Samenko hitting a player who went after the great one. It was a pleasant drinking beer. For the first full day off to start wrapping up this one was quite delicious. A definite fruity experience. Plums, apricot and peach are what I get out of this. It finishes nice and dry with zero bitterness. This would go well on an upstairs patio overlooking a harbour at dusk while eating Fish and chips. I know I disappointed people for not doing a final sentence shout out to hockey but that is how this beer makes me feel.

He shoots, he scores a winner.