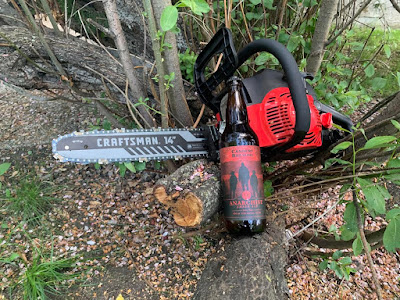 Hello there fans of Lonebiker. Wait... fans? Wow, look at my ego. Well readers can be fans right? I know there are folks who come here regularly looking for content so what do we call them? Lonebikerettes? Confused people? Mom?

I really don't know. We will just stick with readers for the time being, although Lonebikerettes seems to be sticking and the contents of my tiny brain are getting excited at the notion of calling readers that in the future. We will run that by Mrs Lonebiker a bit later and ask for her opinion where she will reply with "I don't care"and I will get mad and probably pout or something.

So all of that was said to let you know there will be rides this set off even though getting out is going to be hard.  Today was supposed to be a ride day but things happened and well here we are reviewing beer.

Penticton, British Columbia is the home of this brewery which has been around since well I don't know cause they didn't put it up on their website. A quick Google search told me that they opened up in Two thousand and One so they have been around for a while. This brewery is in a dream town in Canada's dream province, British Columbia.

So being in a dream town it naturally has a tap room with a menu full of genius pub food from cheese and meat boards to beer nuts to pretzel bombs. The brewery has won several awards for their beers over the years.

It poured a beautiful dark gold and was the perfect example of what a great beer looks like. A powerful three fingered head stood boldly over top of the glass yet had the decency not to slide down the outside of the glass onto my exquisite hardwood. A smell of being out in the woods in the evening on a hot summer day, a slight but pleasant musty smell in the cooling but still hot air. You know... Heaven.

With this one giving me sexy lacing sliding down the side this was the perfect thing to be drinking on this hot Alberta night. There is really nothing that comes and slaps you with distinctness. It oddly reminds me of iced tea, but done the real iced tea way which to me is actually kind of gross yet it works for this Amber ale as the weirdness is quickly washed away with a slight hoppy yet smooth flavour. This is very good although if I was at a campfire I'd rather try something else after having one. 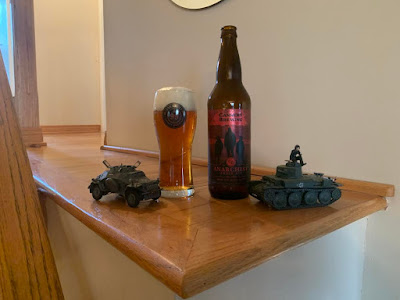