This was supposed to be a ride report, I swear. It was an early wake up today which messed things up on this start to a nine day set off, and that is pure heaven after a rough last couple months working. Well, last set wasn't too bad stuck in the cozy confines of the shop for seven days.

Hope you all are fine, did you get out and vote? if so, atta human! I don't think anything really changed did it? We still have the same guy and nobody is freaking the fuck out like so many disjointed political people with fervour for one political party and literally nobody or nothing else in their sad lives. Just that political party, it can do no wrong... I mean the leader of one of these parties can choke a baby rhinoceros live on tv and the followers will make excuses for the rhino choking.

Ugh, even the slightest hint of political talk makes me queasy..

Yes today was supposed to be a ride day but I blame work for getting in the way again. The end of day shift closed things out yesterday and I planned on heading out for a light rip through some paved trails to ease back into things but I did get up too early and when it came time to head out to the trails my tail tucked up and I was ashamed so I hid in my den instead and looked at plastic models on Amazon. What a cool guy I have become!

Enter Tysky from Poland. An old time beer that has not made its way on here over the years until tonight. From the town of Tychy (yes, that's in Poland) this one has been around for... wait a minute. Did I read that right? 400 years!

Sorry, I just woke up after fainting on the floor. That is insane. This is one of the oldest breweries in Europe and was started in sixteen twenty nine... Did I mention that this is insane? Cause it is. "Hey Lonebiker, calm down." came chatter from the intern station at the test lab. "How old is Molson's up here in Canada?" I retorted.

The pour. Our head pourer Mirkel effortlessly dumped this into the Hardcore mug showing a slightly darker golden beer that adorned a two fingered head that hung around for a bit and lingered on the sides of the glass as it was downed, I really admired its resilience.

Smells of a slightly I would say fruity brew emanated from the glass. You could say biscuits and some sort of bread like substance as well. It was pleasant and not too strong, yet what beer is? We sipped and we were greeted with tastes of a dark fruit wine like fruit (ummm... you mean grapes Ken?) Well no, it's like a darker almost rotten fruit and I mean rotten in the kindest of words. Bread like tastes also come from this. Enjoyable you ask? Meh... not bad.

Would you have more than one? Nope. 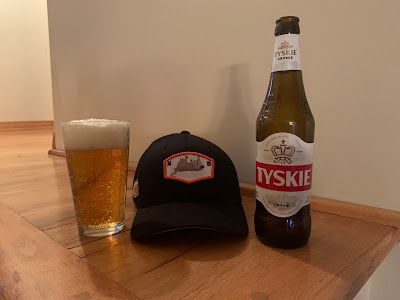