Not too sure how many cultures deal with freezing feet and the pain that happens when they start warming up. I thought I was going to die on the drive home. A problem when we go from Summer to Winter and back to Summer again. The transition can always be a little hard to dress for and today was no exception. I thought I was dressed properly but today needed some light Winter gear, aka warm gloves (Kent lent me a pair) shoes and possible head gear.

It was a cold and rainy day and the plan was to meet up with sir Kent-Rides-A-Lot and take the quarry trails until we found Fort Saskatchewan. I was supposed to meet him at the Science Park and Kent being the mad psycho he can be decided to ride to the Science park to meet up from his Terwillegar home.

We ended up meeting at the Ainsworth Dyer bridge and by the end of that three and a half or so kilometre ride I was done. My hands were completely frozen and I was soaked in areas. Kent was completely soaked and frozen in areas and it was clearly evident there was no Fort Saskatchewan attempt being made today.

We had eliminated the idea of the quarry ride altogether.

I knew I was done on the bridge but pressed on for a little bit as we passed across again and climbed up into the streets of beverly residential where a potty break ensued in the trees and I high tailed it back shortly after. The ride back is where my feet froze and little did I know a section of the drive home was going to really suck.

Clearly this is a ride where Kent should have did the ride report. An almost end to end ride on an incredibly shitty day. Hats off to a real man. 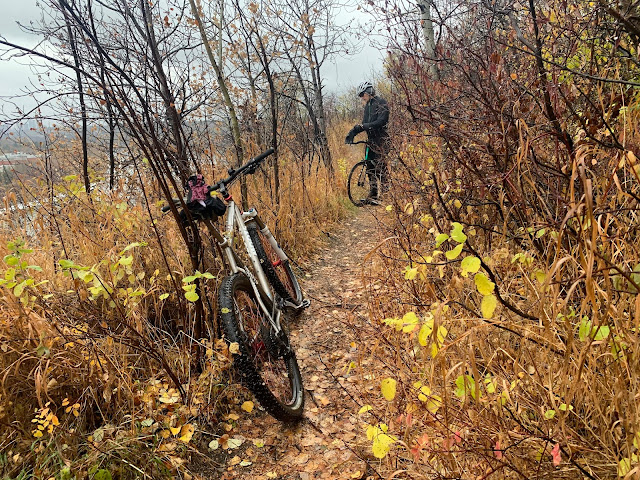