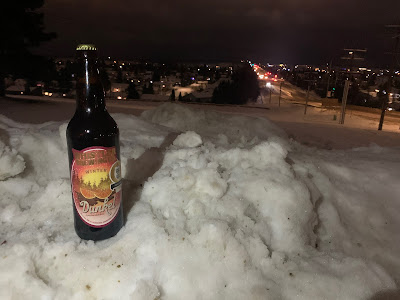 It's quarter to seven in the evening here in Beaumont and it just finally stopped raining, in short. I don't want to be grumpy, I really don't want to bitch and moan about the weather over here just like those whiny freaks over there on that Facebook thing but I mean come on...

It rained all day here and I threw the wrench in on the planned ride. This was supposed to be the week of the Lonebiker with a ride going every day on this precious set of days off and already due to the shit whether my plans are not coming to fruition. Going out in the rain today and getting wet was low on the list of priorities on a warm January day. It is just hovering at the freezing level outside which compared to how cold it was here over New Years it now feels like we are in the tropics. I would gladly take -40 and no rain.

Whistler Brewing comes from you guessed it! Whistler, British Columbia. This brewery has been on here previously and we are bringing their Winter Dunkel seasonal Winter beer at you. The pouring crew is ready so let's hit it!

The pour gave us a dark beer just like a cola, a good two and a three quartered fingered head stood atop. A very distinct smell reminding me of those chocolate oranges that you break and eat like an orange. I could only assume it will have the same flavour too. A heavy smell of malts mixed in with the orange and chocolate makes this one of the most distinct smelling beers I think we have ever had.

The first few sips were a bit hard to take, not going to lie as it was a very strong taste to this one. A lot of specialty beers do not have this much coming at you at once. It is definitely one of those chocolate orange tastes which after looking up they are Terry's Chocolate Oranges. This is most likely one of the most unique beers I have ever had but sadly it isn't my taste amongst the orange and chocolate I am getting a dark malt flavour with hazelnuts.

If you love those chocolate oranges than find this beer. it might make one quite happy. Otherwise... 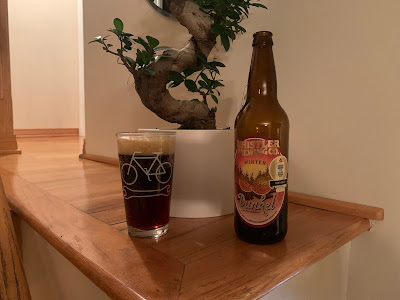