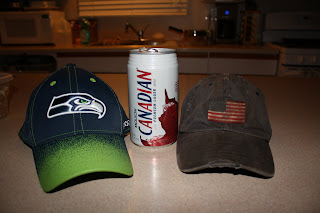 
I used to wonder why most beer reviews would review beer that was out of the ordinary , that came from small breweries in strange and faraway places . You know . Breweries that try there hardest to make a good beer . You know unlike the mainstreem beers like the one I had tonight .I now understand . Mainstream beer kind of sucks.

Presenting Molson Canadian , Canada`s crown jewel of beer , NHL hockey playoff batter , songs have been written about this stuff (so I think), this beer is being drank in every Canadian town as I type this (when you think about it , that`s alot of Molson Canadian) . There is alot of Canadian pride that is involved in this beer ..............or used to be . In 2005 molson merged with coors therefore ending it`s reign as a proud Canadian and became American (ooooh the irony)

I`ll admit I wasn`t to saddened to hear the news at the time , in fact I had a good laugh . The Molson "I am Canadian" pride commercials annoyed the hell out of me , they were directed and played by Americans (it`s called marketing people) and they were good at it . Those commercials had won over the hearts of just about every high school kid at the time .

As far as the beer goes , it tastes like shit . I`ll admit , I do drink Budweiser which isn`t that far off from Molson Canadian with less of that skunky taste ..............he he he . The last month I have tried new beers which have awakened me in a whole new beer tasting light . Unfortunatedly those are expensive , so I`ll just have to wait till Friday night to try new beers . Oh man , this stuff is no good . Is it next Friday yet ?
Oh yes , I almost forgot . This stuff gets 1 sud out of 5
at November 20, 2009