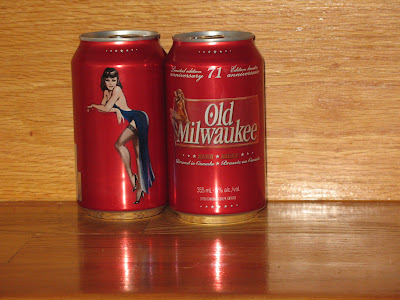 After an incredibly gay week of non-riding it looks like it is finally over and I can review some beer . Do I deserve to review beer . No , with splendid new wheels and brakes that still have to be broken in .........Oh and there is the matter of the Moots sitting and collecting dust .....It`s a freakin Moots ! Your supposed to ride the shit out of it !

Old Milwaukee is a very proud American beer which I found strangely brewed in Ontario (according to the can)After a wikipedia search I realized it is brewed by Pabst brewing in ........well somewhere in Americaville . Wiki wasn`t working too well for me tonight . I will say that this can has always peaked my interest in those cold beer coolers as it always displayed some fine looking ladies on the side . Now that`s genius ! What a great way to sell beer ! I`m sure there are a few pathetic guys who bought this beer because of the "graphics".

The pour gave me a very large 5 finger head that took a long time to dissolve making me think that I should do some investigating and figure out why different beers leave different heads , maybe some other time though cause I really don`t care . As for the taste let me tell you this first . This is considered an "economy beer " , so don`t expect much . I didn`t and was happy with what it offered , not a bad tasting average American ale that will leave change left over for those delicious cheesy poofs that go so great with beer .