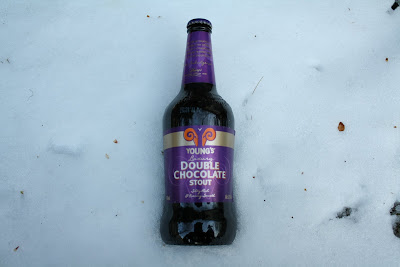 Chocolate beer you ask ? Why yes , yes it is . From Wandsworth in the sunny United Kingdom comes a beer that many would probably be afraid to try . Youngs brewery was established in 1831 and was brewed in the famous Ram brewery up until it`s closure in 2006 . What`s special about the brewery is it pretty much remained unchained since 1831 , although it did have modern equipment in it , it still had original equipment from the good old days . Up until the end shire horses and drays were used in delivering the beer within a mile of the brewery . Youngs is now brewed by Wells & Young`s brewery in Bedford , U.K , the proud home of the Bedford Eagles . 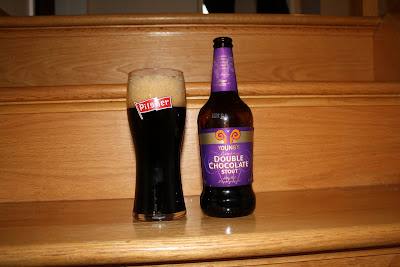 The opening of the bottle was an event as I looked in and it looked like fog on the inside of the bottle . The pour went well and I realized how dark this beer was ,the head was big and remained for around 5 minutes . As you can see by the photo it was quite dark as you couldn`t see through the bottle . The first sip was not very good but I realized I should give this a few as I am just not used to beer like this . Low and behold once the bottle was half empty I was enjoying it . It had a slightly bitter taste when it first hit the mouth but that went away quickly and my mouth was full of chocolately beer goodness . The beer is quite good but obviously not for everyone . Aside from the chocolate , it had coffee and a little bit of nut flavor in it as well . If you ever see this in a store grab one ! It`s worth the experience .