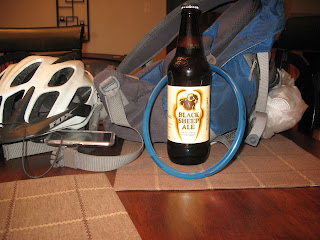 Again from jolly old England ........well not so jolly England with the way they are performing in the World Cup we bring you Black Sheep Ale from Markham , Yorkshire , England . This brewery was established in the early 90`s at the time grunge was starting to get big and MC Hammer was doing his thing with those big lame ass pants . The logo is quite popular in England and is found in lot`s of pubs that don`t even supply the beer which made this beer reviewer scratch his head and think that was a little strange .

No pour as this was a bottle and I do prefer drinking from a bottle . The aroma was nice , I thought it was a good way to start things off , the taste sure doesn`t disappoint either with a good pleasant fruity taste . I am sure enjoying it sitting here after two rides on a beautiful Saturday .

My apologies for the short review , an Ewok followed me home and I am a little nervous as it`s sitting on my front lawn staring at my dog .