Giving some love back to the Stumpjumper ......

Or so I thought ! Two minutes into this late morning ride my foot slipped out of the pedal on a sharp climb and my knee smashed into the stem ......It was very painful but I sucked it up and kept on going (hey I just started !) On the way to Fort Saskatchewan I was thinking about the last time I took the white bike in the middle of summer on a nice day and then this shitty thing happened ,Oddly enough , today I was wearing the same jersey and shorts I wore and that rough night . 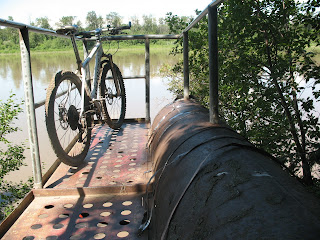 Thankfully nothing bad happened other than roughing up my knee , it is now puffed out and was miserable to try *golfing with the wife later that afternoon . The ride was great , but I can honestly say I really wanted the Moots or the Ibis , I think I spoiled myself . The shifting was annoying today as it was real slow , largely in part to having the cables run on the downtube . Once any fair amount of crap gets in there it affects the shifting dramatically and I never understood that ......Why ? It has always been a problem on that bike , and they still do it ......Way to go Spushulized !