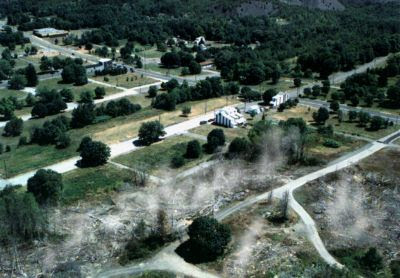 I have been reading Bill Bryson`s "A Walk In The Woods", a story about trying to hike the appalachian trail on the East coast of the U.S . One part of the book the author drives to a small town in Pennsylvania which has been on fire for well over forty years . In 1962 a supposed garbage burn lit up the coal underground and still burns after some poor government attempts to stop it . It now is burning over 12 square kilometers underground. Needless to say , it sparked my interest .
Today , only 7 people live there ........7 brave people . Toxic gases are pouring out of the ground , and the ground can open up and swallow you in a flash . In 1981 a twelve year old boy was almost swallowed but was saved by his cousin , that incident garnered National attention . The government decided in 1984 it would be cheaper to buy out people at 42 million rather than fight the fire which would cost more . Most of them left . 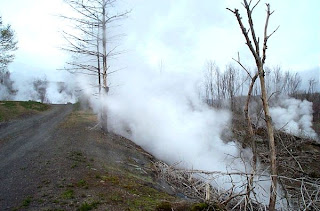 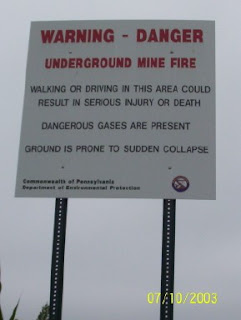 If you were to go there today (which you can) you would find a gridwork of streets with no buildings as most have been bulldozed down or burned (who would have thought that !) . Personally I would love to go see this town , it was once home to 2761 people . Now according to wikipedia , 7 .

The danger of seeing this place can`t be that bad , just use common sense as I see it . If I`m ever in the area there would be no question as to if I would go . In 2016 the town residents will return to open up a time capsule that was set in 1866 .

Luckily nobody has died from the underground fire , although our good friend cancer may have hit some people that have lived there amidst the toxic gases for years before being evacuated . Stories like this enthrall me , and I can thank my Dad for inheriting that gene , as he was one who was always into stuff like this . If he were alive today I am sure I could have persuaded him to take a trip to Pennsylvania to take in a Steelers game and a trip to Centralia ....sigh 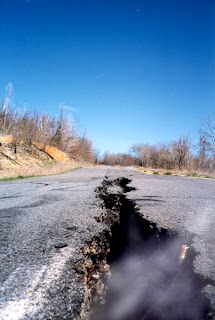