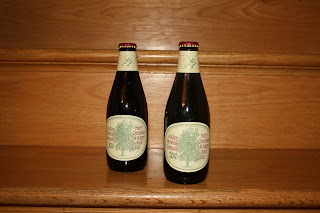 This is the time of year that all the smaller breweries put out their Christmas beer . Me being the great beer reviewer that I am , I will try to review three by the big day , and let me tell you that is a feat that may prove hard when shopping just in Beaumont , but I will give every ounce of energy to get two more after tonight .

San Francisco is the home of Anchor beer , the World Series winning Giants and more importantly the five time winning Super Bowl Champions , the 49ers . Anchor was started in 1896 but the brewery burned down along with most of the city in 1906 following one badass earthquake . They reopened in 1907 in a different location had some quality control issues in the fifties and are now strongly running today . Could it be cause Skye vodka bought them out ? Their take on Christmas Ales started in 1975 and like all good breweries , did something cool to keep the tradition going each year . Their take was changing the recipe and the label on the bottle each year, Very cool !

The pour was dark , tall , and handsome . Much unlike the current me . The two fingered  head stayed on for over five minutes telling me it`s got personality that likes to be heard . The smell was a tad off for me as I have been fighting a cold all week (and just about damn near cancelled this beer review !) but for some reason I thought I had an old pair of summer bike socks stinking up the den , and realized it was the beer . Mmmmm, beer that smells like foot stink ......Yummy ! Smelling my second one now out of the bottle and I`m not getting the bad odour , so lets not worry about the foot odour problem shall we ? The taste is what you would expect from a beer like this . It is full of Christmas flavor , cinnamnon , nutmeg , and roasted malts are there to make you sit back in your easy chair and nervously wonder how that sweaty fat bastard gets into your home each year and probably goes through your wife's underwear drawer while you sleep . 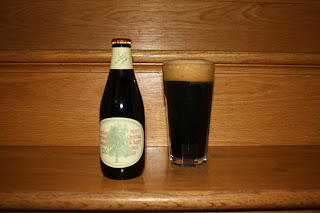