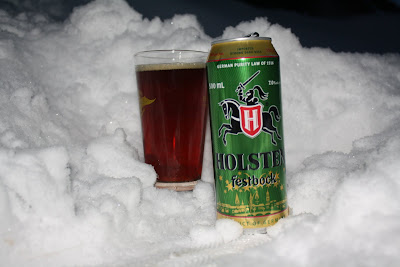 Hamburg. A city better known for it`s awesomeness, was recently ranked 23rd in the world for liveability, and number 1 in my local beer depot for green canned German imports. The city is home to Holsten beer and that should make that great German city even more proud. Like most breweries it was founded back before space ships, cars, boats, and flying donkeys (that we so heavily rely on today). Yes folks, we were all a mere glimmer in our great Grandfathers eye when this brewery was formed. The year was 1879 in the United Kingdom. It eventually made it`s way across the pond where it was bombed into utter submission by it`s former U.K masters, rebuilt, and now makes quality brews.

On to the pour. My fears of strong beer have been evident on this site, and this is a strong one. My history of trying European beers have been a little off as well. They always left me with a bitter taste in my mouth, and this beer being high in alcohol content left me shivering in the corner of my room afraid to come out cause I know the Holsten may kick my ass. The beer poured dark and angry, I had to take it outside to let it calm down. The first taste was a relief. I checked my vitals and seemed to be all right. In fact, the taste was quite stupendous for being a high alcohol European beer. After a few more though, you could tell it was a high alcohol beer. The taste of licorice seemed to come up for some reason. In the end. Not too shabby.