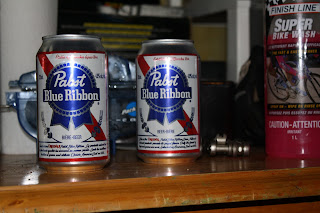 A fan favourite of trendy beer drinking dorks all over the land. Pabst which started in 1844 by Jacob Best, and then a short 5 years later it was named after some lucky dude by the name of Fredrick Pabst. Pabst makes it`s home in Woodbridge Illinois, just a short drive from Chicago (you may have heard of that place).

What makes this beer so trendy? The price is a huge draw. 7.50 for a six pack. Pabst is known as a cheap beer, and cheap beer and College/High school students go hand in hand like a nice carbon hardtail and miles upon miles of smooth flowy singletrack. Sadly though, hipster duffuse`s cling to Pabst like one would cling to a life raft when out in open sea. This beer`s name came in 1893 when it supposedly won "America`s best" at the World`s Columbian expo, ironically there was lots of controversy as some say it never won, and to this day remains a mystery. So how do you like that ya hipsters? You may be drinking a scam!

The pour, or lack thereof. I feel one cannot enjoy a Pabst in a glass unless he or she is letting everyone know what they are drinking. To play it safe I drank mine out of the can just in case my wife walked in and saw me, so she could say "oh, he`s drinking PBR. That hunk!". You know it happens. The taste is really quite good, each sip just seemed to get better and better. I then thought about some of the great beers I had on these reviews and the tires came screeching to a halt. Oh, yes! 7.50 a six pack! How could I forget. There`s value in this stuff, and if some special lady or some cool dudes (for the ladies) see you enjoying a Pabst. Who know`s where those roads will take you.