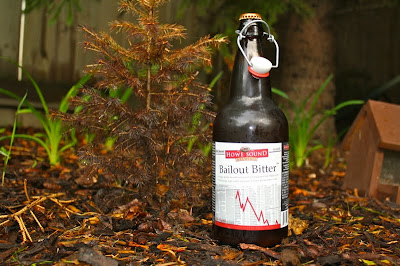 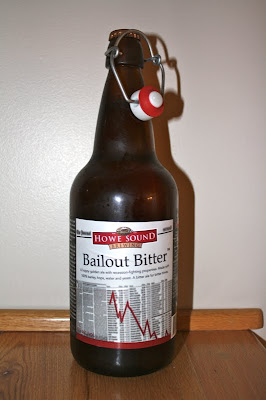 When searching for beer`s to review for this, sometimes there is that one that just stands out. I think I heard trumpets blaring and a shaft of light from Heaven when I saw this one!

Howe Sound from Squamish, British Columbia  has got to have some of the best beer bottles in the world. The "pot stopper," re-closable bottle which was widely used in Europe in the fifties has made it`s come back with Howe Sound Brewing. One reason it is re-closable is cause it is so big. When you get one of these you are getting 1 liter of beer my good friends! Yes, that`s right. 1 liter. Perfect for a Friday night....or the whole weekend.

This fine brewery boasts a pub, and a hotel, and yes it is located in Squamish. Land of some seriously kickass riding. Just an hour north out of Vancouver, don`t let those hockey hooligan, city wrecking, douchenozzles discourage you from going. These are some of the finest areas in the world. $109 for a room in the high season, and you are staying in a brewery! How awesome is that?

The Bailout Bitter is quite costly. $10 for a bottle, but yet look at what you are getting. This ain`t no Bud super can, this stuff is high class. Appropriately named after the recession which we seem to hear so much about these days, what better way to deal with your problems! Drink from a one liter bottle of beer, when empty, refill it and drown your sorrows away with homemade moonshine!

The pour gave a marvelous head that showed itself for quite some time. A golden proud glass stared at me and I wondered if I was supposed to drink this , or salute it! I chose the latter. The first few sips took a little while, and I wondered what to write. It was a tad dry, a smidgen bitter, but after four sips it was something I was happy to have on a Friday night. After all, Friday night`s only come once a week. Get this if you want a great beer for barbecued burgers while out on a patio. Get this if your significant other will only allow you one beer in a night. Get this if you are a giant cheeseball, and you want to impress your friends with a different brew. Oh, just go out and get it already! 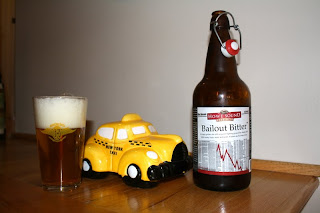