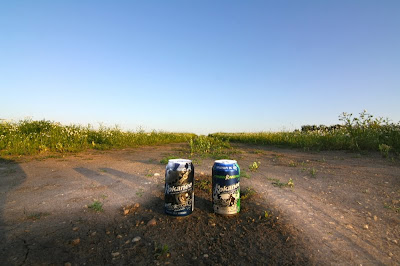 Well the weather has finally turned around and it finally seems like summer! On Canada day weekend no less! What better beer to  review than Kokanee. A proud western Canadian beer that has been annoying us with their commercials for some time now. Whoops, I just started this and I`m throwing off a negative vibe about this beer. I guess the commercials are great , they did feature hot chicks on mountain bikes at one point which made me go out and buy $300 worth of Kokanee paraphernalia. Kokanee started small and was bought out by Labatts in 1974, and with clever advertising, helped bring it up to the famous brand that it is now.... That is if you live in Western Canada. 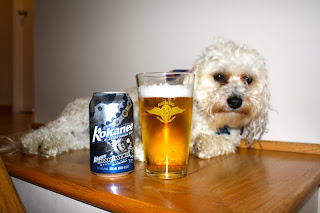 Now ladies and gentlemen. I won`t lie. I have had my share of this beer in my time. Many times my late Father would come over with a six pack and we would talk about important things, like airplanes, football, cars (that was him), and how to get outside in the woods more. He truly had the right idea about things!

I could not review Kokanee without mentioning Krankworx. A large mountain bike event held in the holiest of holies, Whistler. Although most of it is freeriding which may not be my cup of tea as I am a true believer in riding downhill should be earned, not given....but some say I`m grumpy. I say go to hell! I`ve been riding close to twenty years and I ain't ever gotten no shuttle up some damn hill. Those darn kids with their full faced helmets and their overpriced heavy freeride bikes...Bah! Where`s my damn walker?

With all that being said. Krankworx is a pretty kickass event, and Kokanee gets some special love for putting it on.

On to the pour now, it poured golden yellow, after a smell I took a step back and saw how Kokanee showed its similarities to all the commoners out there. Which is how I always saw it when I took a trip to the store to pick something up. The taste takes me nowhere special, it won`t blow you away like so many of those micro beers will, but that`s not what it`s here for. It`s for weekends like Canada day! The Canadian Football league just started, why not pick up a few and watch a game will ya? The best part about beers like this is you always know you are going to get something that won`t ruin your evening. Unless you have too much of course.