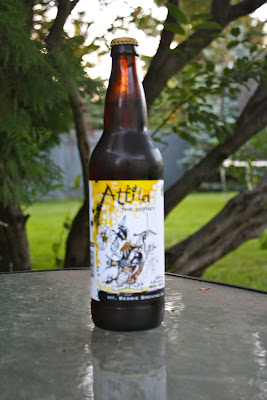 Mt Begbie. The first craft beer that won my heart over to the craft beer God's when I started reviewing beer on here many moons ago. It was Begbie Cream ale that did it and to this day I still pick one up from the store when I see it.

Revelstoke, British Columbia is a great home to this brewery which puts out six beers including two seasonal beers which Attila the Honey is. A seasonal beer brewed for Summer which is exactly what we have been getting in Alberta this weekend. Hot sweaty temperatures which makes for soupy like chamois when heading out on the trails. Mt Begbie was started in 1996 by a couple named Bart and Tracey Larson, Bart who has a phd in nuclear physics puts his big brawny brain to good use by brewing beer. I say good on you sir.

I poured this into a smaller skinny glass so I could save some for drinking from the bottle. The pour showed  a darker beer with a slight tinge of angriness that never seemed to materialize. A one and a half fingered head stood proud for as long as it could as I screwed around with my stubborn camera. The first sip was truly refreshing after an afternoon of yard work and then topless Jeep driving to amuse the kids. I guess you could say it is a tad watered down as the flavour doesn't come right out at you. Nevertheless, this a great tasting beer that could be enjoyed out on the patio while having a Summer barbecue. 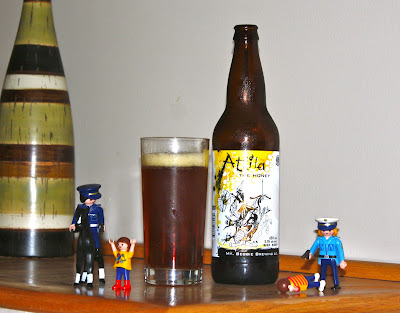