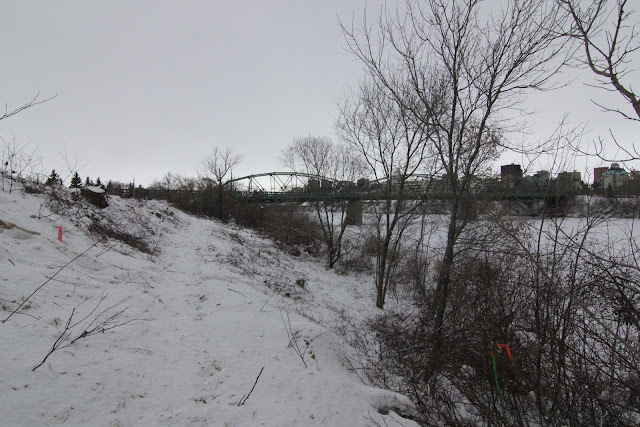 Things in the valley are going to change for a while, with construction of the new Walterdale bridge large sections of trail will be closed and rerouted. Starting tomorrow the detours will begin. Too bad this has to happen but it  is something that must go on.

Today's ride from the Cloverdale park to the Dudlie B Menzie bridge was a fight on fresh snow. The incredible warm temperatures brought out several riders who also seemed to be fighting the snow, I saw the ripped out trees for the new Walterdale and even tried riding the trail from where they once were only to have to give up due to all the woodchips. A fire truck caught my eye and some "Idle No More" action was taking place. Well, one guy who started a fire. They did their job and put it out and the guy chanted the entire time. Interesting. That's for sure.

The ride was anything but a physical one unlike the few I have been having lately. Other than fighting the snow. Hopefully this will keep up as I'm having myself a pretty darn good January in the bike riding department.