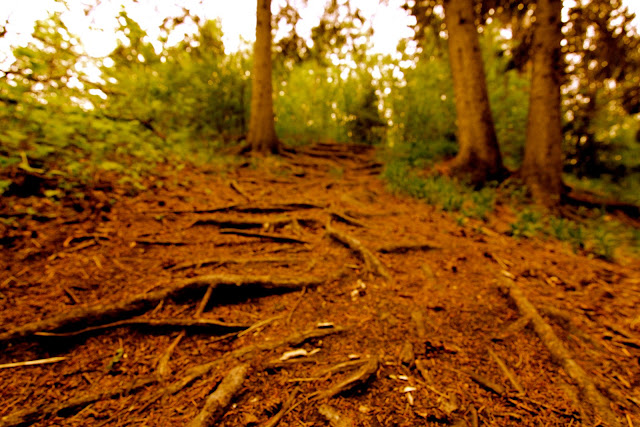 A short one on shaky legs, a frustrating event as I was bouncing around all day at work psyched for this ride. The conditions were perfect with the rain seeming to fall all around but where I was riding which made it a tad more frustrating. Was it a lack of stretching? Could very well be.

The ride from Mill Creek to Ewok and a climb up to the top of forest Heights while chasing a recreational cyclist on the sidewalk climb but could not catch up. Maybe recreational cyclists are not so recreational, oh how we judge... I was in rough shape as the legs were like two pods of jelly and with each pedal stroke on the climb it only seemed to get worse. Once at the top I rode the fine singletrack that takes you to Ewok (I'm sure it has a name but who really cares) and descended rapidly and crossed Dawson, my second favourite bridge in the valley.

Once on the north side I headed for home and came up on a lady who has probably become quite infamous on the local forums, she asked me if I needed tools as I was putting my camera away, the plan was to put a pic up here letting people to walk through her yard and be respectful. Her property stretches all the way to the river, a strange anomaly in the valley but it is hers so... After talking for a few minutes I found out she is putting up a fence, she didn't say when but her main reason: Off leash dog walkers. I felt we connected right away, she spoke of several cases of people flipping her off and one guy even pushing her over (she's pregnant) she even had club riders on cross bikes flip her off as they rode through which made me wonder what really is going on. Was she instigating any of this? It's pretty obvious the guy who pushed her over should just be thrown in the river with cement shoes, but why was she getting such a bad reception from so many other people? There are two sides to every story and I would love to hear the other half. To me she was incredibly nice and told me she had a lot of respect for mountain bikers (oh how I blushed). I'm guessing she was friendly cause she saw me carrying my bike through her yard.