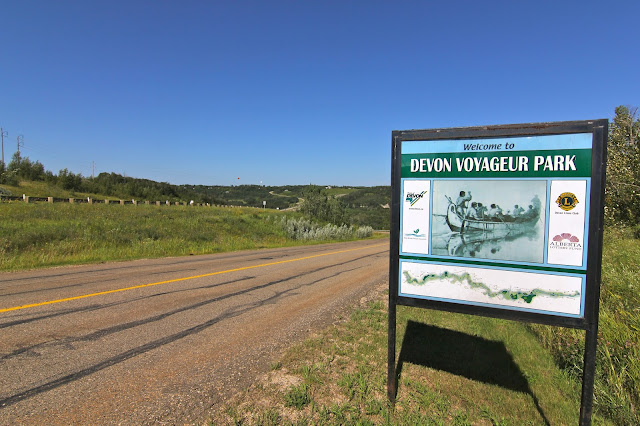 Getting more and more mobile as the days go on, this long weekend I was able to get in the Jeep and drive. Where did I go pray tell? To the exotic streets of Devon Alberta! A 25 minute drive from my home. For one nursing a sore leg this is the perfect destination. For years Devon has held my curiosity primarily because it shares the exact same river valley that runs through Edmonton. Hence, the possibility of sweet trails looming through the area is a definite possibility. Years ago I would think of making a trip but quickly dismiss the idea as the thought of raging redneck lunatics on dirt bikes and quads running down and ruining the trails would make me throw up in my mouth. Sadly my prejudice towards those kinds of people ruins my sense of adventure and I would stay away not realizing there are lots of cyclists in those areas as well. Little did I know a cyclist culture was brewing in Devon.

The last few years Devon has been branding itself as a bike town. In fact they are embracing that title with a strong sense of pride. My discoveries this weekend made me tear up and I wondered why other communities are not doing the same sort of thing? They don't necessarily have to promote cycling although I wouldn't dissuade them from promoting bikes. Cause you know, riding bikes is pretty much the greatest thing next to... I'll be honest, I can't think of anything better than riding bikes. I tried, I really did! Towns that promote healthy lifestyles with the scope that Devon is doing should be getting special grants from the government. If you make a trip down and see the bike park built there you would understand. It is quite impressive. A large mountain bike skills park (Edmonton doesn't even have one) runs through the park and they are currently adding on to it. The trails though are something I haven't heard much about, there have been races held here and more are coming, with a large loop that runs along the river alongside the golf course and heads up onto the hills looks very promising. I will make the journey down with my bike once life returns to normal. 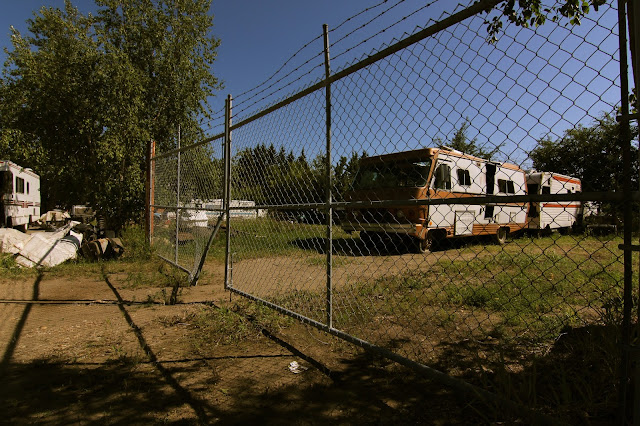 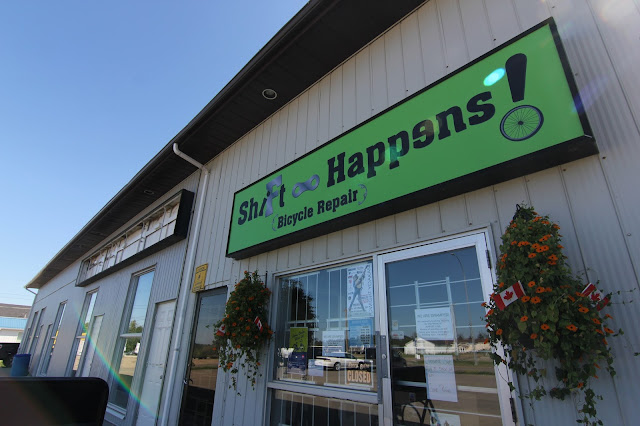 Unfortunately Devon is like every other town and is building large Godless ugly shopping centres away from their main core. I stopped in to grab a Tim Horton's Ice cap at a giant parking lot named Southport which caters to us and our automobile addiction. I wondered why we are all shifting to this type of ugly urban bullshit. Giant parking lots and buildings with the architectural flare of a soiled diaper left out in the rain are now a part of any growing town. Meanwhile the once awesome main street with real personality slowly dies. It's not just Devon that is doing this, it is every town that has been growing in Alberta. I will never understand why we are getting away from our culture. It's tragic to think of where our towns will be in ten to fifteen years.

Once away from the Godless parking lot I made my way to the quiet main street. I sadly wanted to get out and see some of the coffee shops and stores but walking on a sore leg kept me confined to the safety of the Jeep. I saw the local bike shop Shift Happens and noticed a sign on the door that read "closed today, gone riding." These terrific people have their priorities set in the right direction and I got out of the Jeep and stood at attention and applauded for a good solid five minutes. Truly the people who run this place are awesome and fit right in with the culture this town is trying to brand itself with.

The rest of the visit was spent admiring the beautiful residential streets with their trees rising over the road. The older areas have incredible personality and add to that status of a great town. Funny thing how something as simple as trees can add so much. A drop back down to the river where Devon golf and country club and the campground make their home. Ignoring the golf course all the while thinking this would be a great thing to do with my wife I went into the campground and toured around and was floored at the mass of humanity all packed tightly together. Being a long weekend this place was full. I could not get over how close everyone was sitting outside their giant air conditioned, satellite tv'd trailers. "Are these people nuts?" I said aloud not thinking of the top being off my Jeep with both windows open within earshot of several campers... Do they even call themselves campers? I wondered... How is this considered getting away? Being five feet from your two neighbours with the sound of radios, and generators making noise throughout the campground. One family had their tv outside and were probably watching some bad show on TLC. This was truly an eye opener. With the trails that Devon has, escape was a definite option, I'd bet lots of them golf and the course in the area looks quite nice. So, who am I to judge... Are all campgrounds like this? If so, people truly are crazy.

I left the campground and dodged golf balls, yes the road back up to town cuts through two main fairways so be careful. I'd imagine there have been incidents over the years. Leaving this cool town I wondered why I lived where I do. This place has lots to offer that a lot of other towns don't, and lets be honest shall we. They had me at biking. What an awesome place that caters to us.