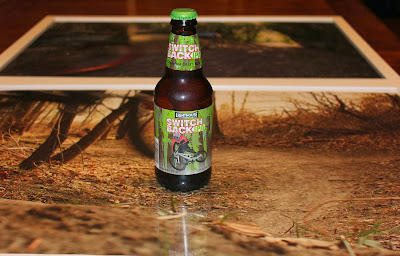 A return to riding and a return to beer Friday. Sadly (for me) it's the beer reviews that seem to be the most popular thing on here. I'm guessing that is because more people drink beer than ride bikes. Well my friends don't you know if you combine the two you suddenly become awesome? As is the case with most cyclists, once a ride is done there are usually post ride beers. At one time post ride beers were always spectacular after a good mountain bike ride. Now just having the pleasure of riding a bike on a trail or even road is heavenly and orgasmic. Riding any bike anywhere kicks ass kids. And this weekend we have a beer donated which features mountain bikes! Hallelujah! Could breweries that do this be any more cooler? Nope, I didn't think so.

Lighthouse brewery from Victoria, British Columbia was established in 1998. A small brewery doing their thing in one of the most beautiful cities in the world. Some people really know how to do things right and live the good life and judging from this brewery, these guys are on top of things.

Switchback, an India Pale Ale. Not something I am too fond of had me at the label. A guy riding a downhill bike in mid flight who I'm sure posts pictures regularly on Pink Bike and uses too many exclamation points when he wants to make a point!!!!! These kind of guys are simply awesome as they will walk their bikes all afternoon up to the top of a mountain to ride down for twenty minutes. That is riding dedication unmatched by many people.

I opened and a foggy cloud of awesome rose from the bottle and I was tingly with excitement. The pour gave a beautiful golden colour that gave a two and a half fingered head that didn't have time to be photographed as ones child had to bother the photographer and ask questions. The first sip was that of a traditional IPA, a tad sour with grapefruit which comes at you like a Bruce Lee movie. Mango makes an appearance and as you drink it down a heavy amount of lacing is left on the glass. This one leaves a slightly bitter aftertaste. In the end, although IPA's are not my thing. It did well and would recommend cause there is a mountain biker on the label. 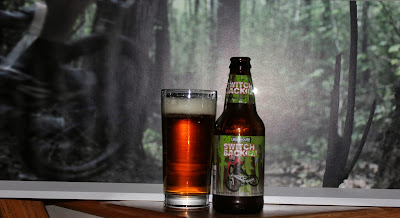