Well That Was Predictable 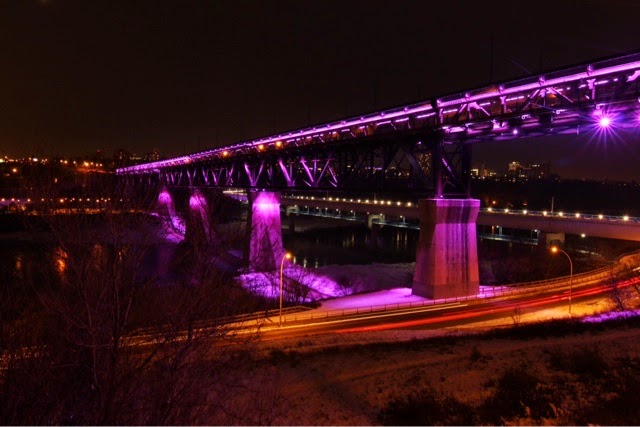 I am writing this all on my iPad as my computer has finally gone on strike, several failed attempts to upload pictures and my Strava ride which ended in error has made me very grumpy. So grumpy infact I  almost shit canned this little ride report. I looked at the new fatbike and my heart melted as this ride's story must be told. Meanwhile my fancy computer is showing a blank white screen. How will I continue doing this with no computer? Thank you iPad for pulling through but how will this look once published?
This was probably my most ridden route last year... Scratch that, the last few years. A trip from mill creek to the High Level Bridge. Yes predictable but I had to see the lights while riding. Nothing was really had in the way of "fat bike orgasminess" it was an ordinary ride. I just needed to get out and spin the pedals for an after work ride. The bike did prove it's worth yet again though.
The valley was quiet except for my loud overbearing tires rolling over the snow and ice. I had exited up by Redbike after a grandeur High Level crossing. In the university neighbourhoods I rode on paved roads and the sound of my studs and tires was insane. I'm sure children ran to their parents. Wives ran to their panic rooms, while the husband nervously looked outside wondering what that roar was hoping they won't have to play the hero to whatever that monster was rolling through their neighbourhood.
I left the neighbourhood and slid back into the dark valley where me and the bike felt more at home. We rode past Kinseman and took the South side of the valley home. Oddly I rode by Old Timers Cabin, and Westcoast Trails with no thoughts of trying them out again. I do have all Winter and once again I am in hideous shape. I had to ride all through Mill Creek afterwards.. Gasp!
I made it home.  Home to a shitty computer, but I don't care. I have a pretty kick ass new bike. 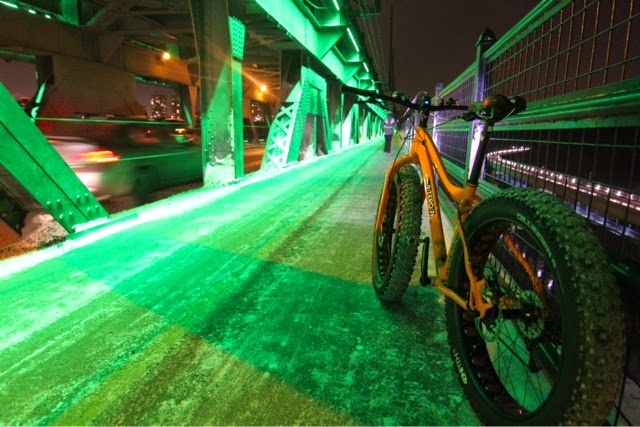