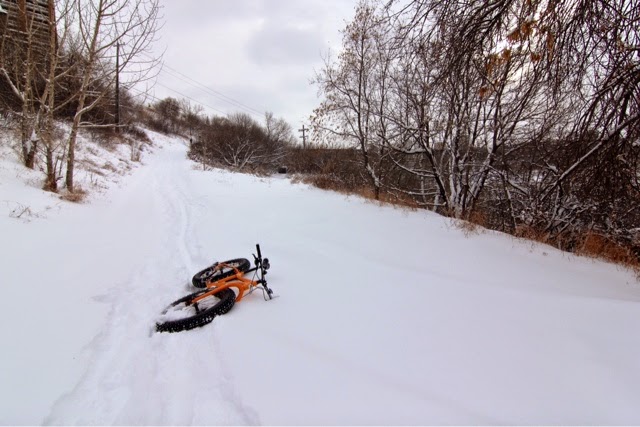 Today. A booked day off from well over a month ago came to fruition. When the day was booked the plan was to be healthy and be the new owner and propertier of a fat bike. The plan was also to go for an incredibly long ride.

Today finally did come and after an insane amount of snow fell between yesterday and this morning I was more than pumped to try out this kickass winter bike in the deep snow. So pumped to ride I even downloaded an old Guns n' Roses song and rocked out to the past while I ate my morning pre-ride spaghetti.

I landed by the Edmonton Queen looked at the snow and cockily laughed. "Look what I'm riding bitches!" Thinking the snow would hear and fear me and my new ride. I did have a few nervous moments of looking at the sheer amount of snow and wondered if I could push this bike through.

"stop being a pussy" I roared and hopped on the bike and quickly spun out in the parking lot, "I'll just push to the plowed paved trail up ahead" I murmured.

I rode the plowed smooth trails like a man on a mission yelling "fuck ya! Fat bikes!!" The whole time.

I passed under the James McDonald bridge where the trail climbed up unplowed where I spun out and was motionless. "Well shit" I said looking at my fat tires. Thinking of my fat bike bashing post I put on here a few years back and how I was right. These bikes can be limited, maybe I was right.

I did continue the ride and saw the merits of the fat tires in the heavy snow. I rode some streets and it handled the choppy unplowed snow and I busted through some snowwalls almost a foot high where I had a small group of people applauding as they watched me ride by. My ego grew and thinking back now it was a group of Victoria Secret lingere models. Yes, it was. I'm sure they were all quite smitten with me.

In the end, I did get my face slapped and my fat bike ego trimmed down. As this snow settles and gets packed down I have a feeling this bike will shine on through a lot brighter than it did today. 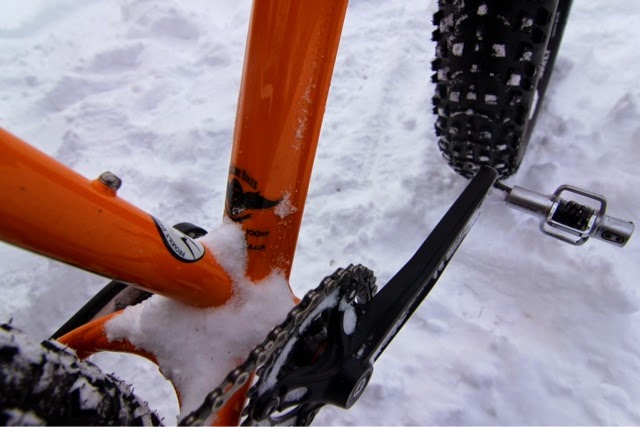