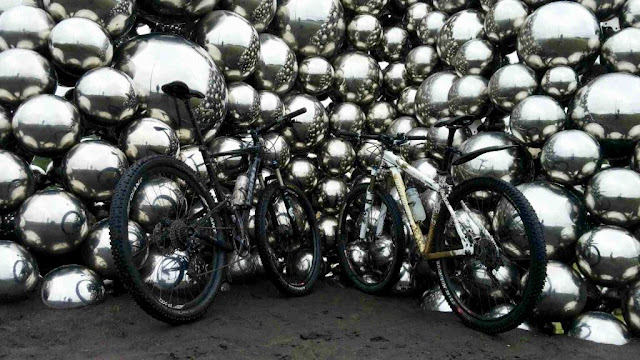 Finally, after months a meet up with Kent. New cell phone problems kept the communication at idle which I gladly place all on Kent's side of things. It is a blameless society we live in now is it?

The meet up was even better as Gord tagged along making this ride quite astounding as I had two thirds of what I now call the "Lonebiker brethren" together. Who makes up the final piece you ask? Really? You are asking such a dumb question right now and now I just want to shut down this lap top and think of everything wrong with society.


The ride started with three guys and ended with one as we all split off as the ride progressed. I was the first to go as I had plans with the family but they were almost hindered as Kent kept coaxing me to go further and further.

I finally turned around at the High Level after we started at the creepy Science Park. Yes, the Science Park. A pretty weird fucking place to take ones dog for a walk. I have always found it to have a weird vibe. Maybe its because of the refineries right behind it? Maybe it's cause of the weird, sketchy people in the area? Or the close proximity to the train tracks... OK, that wasn't cool. I just punched myself in the head for that remark. Love you trains! **Beats chest, kisses finger, points to sky.**

Say what you want about riding in the rain but this was the third ride this weekend and it was one hell of a weekend! Nothing makes the case for buying a cross bike like wet weekends like this. The hardtail is a wet dream to ride but still belongs on the singletrack.

Multi use trails were ridden and we hit lots of greasy corners where each one of us let out a little "Sheeeit!" as we hit them and felt our front tires go sideways. The multi use below Highlands was very sketchy and we had to keep our wits keen to the trail.

Gord, Kent, and myself handled it like true men.

I split off after an LRT bridge crossing followed by a High Level crossing. Mother of God! Could awesome be even more awesome? No kids, that shit actually happened.

Gord thought he was on a bridge ride but I had to set him straight by yelling at him. "WE MISSED THREE FUCKING BRIDGES IN A ROW! HOW DO BRIDGE RIDES WORK GORD? HOW?"
I won that argument, Gord was defeated and Kent could not believe the tension and started singing Adele to calm us down.

It worked... I love you Adele.

I split off to an uneventful return home as the other two made it to Terwillegar but that didn't stop them. A long loop into the city on paved trails took Gord home and Kent went back to the Science Park alone and winning the day with the highest kilometers. 70.3.