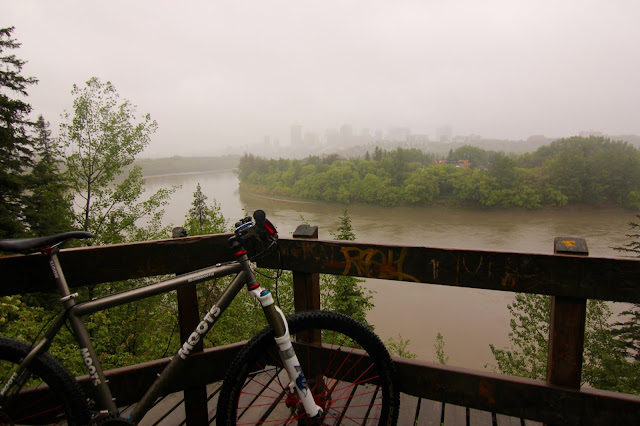 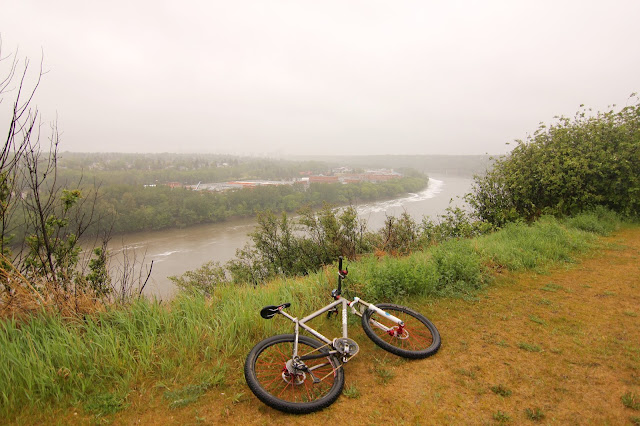 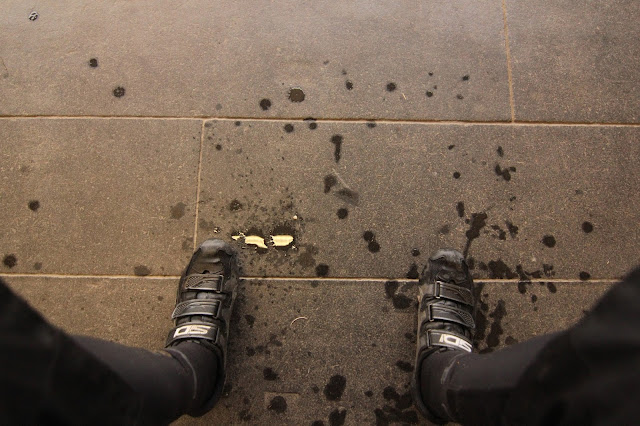 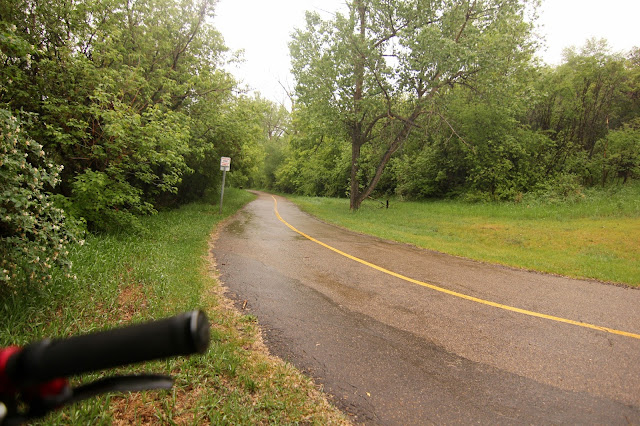 A quick hasty decision to ride this afternoon after a night out at one of the local casino's. That's right the lonebiker has a gambling problem. After dumping $20 into the slots I called it a night after twenty minutes up two dollars and ninety cents. That's right. I know when to stop, that casino isn't getting it's two-ninety back.

Leaving the hotel this morning with $22.90 on me I felt invigorated to head out for a ride in the rain.

Old Timers was the start and I sat in the parking lot for a good solid five minutes questioning my decision to ride today. The rain was coming down not too hard but good enough, the wind was whipping everything around and even threw my camelback off the fender of the Jeep smashing it on the ground. "My camera!" I yelled.

It was time to show the weather I wasn't going to be intimidated and I rode towards the doomed walking bridge.

This ride was obviously paved with the odd section of multi use thrown in to remind myself that I am a mountain biker. The valley was wet, cold, and quiet which had me grinning ear to ear like a psycho for most of the ride.

I rode the North side to Rundle and crossed and headed back on the south. The climbs up had me in heart attack warning mode but once at the top I shifted into the big ring and pushed it hard. Why? Cause I'm a badass thats why. Do you really have to question me on this?

The ride did get me quite wet, looking down at the bike as I pressed on and all I would see was water coming off my head in large droplets was a sign this ride wouldn't last too long. The cold started to creep in too. I needed a lavender bubble bath and I needed one asap.

I did have to stop into Mill Creek to see how the creek was handling all this water coming down. As expected it was flooded in parts and the rest was flowing like a beast. When taking the photo on the bottom of this post a couple had come up to me and were wondering why it would flood so fast considering we are in drought like conditions. I told them a good part of the city flows into here hence the quick water rising. I then quickly made things awkward when I said "Yep! Our cute little Mill Creek isn't so cute when it rains hard." Right when the last word rolled off my tongue I realized what an incredible dork I sounded like. I just stared at him and didn't know what to say making the whole situation all the more awkward.

For ones who know me, you know that look I give in those silent awkward moments that happen all too often when you have know what idea what to do or say.

I just stared for what seemed like thirty seconds.

I'm pretty sure this couple were thinking they have just met Edmonton's biggest imbecile on a mountain bike.

I ended it quickly by saying "bye" when my voice conveniently cracked making me sound like that nervous kid going through puberty on the Simpsons.

And that's pretty much how my ride ended.