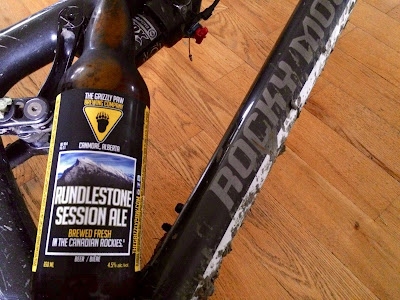 This review almost took place in the afternoon as work was shut down due to what looked like an end of the world storm apocalypse bearing down on the fine folks (myself included) trying to build what is left of Alberta. I came home and sadly fell asleep with my iPad on my chest and was awoken by angry beer review executives as I had missed the afternoon pre beer review meeting at Subway. In short, this one is going to be done around the same time as the others so it has no affect whatsoever on your lives as the readers.

I'm sorry, I just wasted a paragraphs worth of your life's time just now.

After last weeks trip to Kananaskis I showed little hesitation when this one was presented to me in our Beer Friday pre review morning breakfast meeting at A&W. That's right, we spare no expense when it comes to these meetings.

Grizzly Paw, located in Canmore, Alberta. A town where rich Calgarians have condos for weekend adventures. Canmore: Despite it's yuppy populace is quite the incredible place. A stone's throw away from Banff and home to mile after mile of trails. One we just rode last weekend. Giggidy.

The brewery started in nineteen ninety six. They claim to be one of the first brew pubs to can it's own beers and I must say I am quite impressed. I mean... Who the hell else has the balls to say that? Despite having big balls the company has flourished by expanding and expanding some more and is now a staple of Canmore business. If you go to Canmore, please do a brewery tour there. You won't be disappointed.

The pour blew our minds. A good three and a half fingered head grew on top of a murky English Pale Ale complete with lacing left on where the beer once flowed in the glass. This shit is sexy. This is a fine example of an English Pale Ale, slightly hoppy with no bitterness. Well, on second thought a bit bitter but not IPA bitter, a slight lemon taste with a slight taste of old caramilk bar wrapper smell taste. I don't really know how else to describe it. It just works. A refreshing one to have after a short three (well, two and a half) day work week in the hot humid weather and a long ass nap. 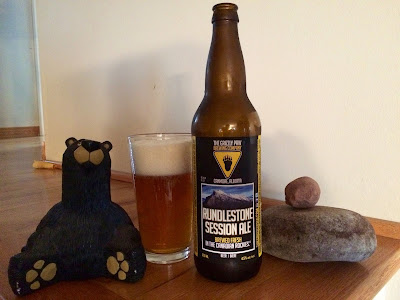