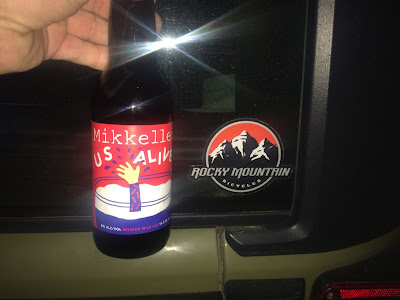 Beer Friday! On a Thursday? Say it ain't so!?

Well it's so. Get used to this. Could be the new thing. New work and new hours has things being bumped around all over. A meeting with the Lonebiker executives was quite heated which resulted in me firing every single one of them. Yes I let my raging power get the best of me but they had it coming.

Nobody out power trips the lonebiker. Nobody!


Sadly though, most of the staff walked off once word hit and I am left alone to do this beer review by myself with one intern who doesn't speak a word of English.

Mikkeller brewery which opened in two thousand and Six in Copenhagen, Denmark under the watchful eye of Mikkel Borg Bjergso, a physics teacher who decided not to make meth and do something right for the world. Which naturally is, brew beer. The brewery has gotten quite popular and Mikkeller is delivering world wide serving a ton of different beers that no man will ever catch up to. Well maybe some will but not me.

Although I really want to.

I believe this is the first Mikkeller beer on Lonebiker and I couldn't be more excited. "Ok, Babkarp, lets pour this one shall we!" I yelled out to my lone intern. Quickly Babkarp followed suit and started to pour and gave us a fine pour showing off Mikkeller's, US Alive in all it's sudsy goodness! a good five fingered head stood atop of this one and showed no signs of going away.

Me and Babkarp held each other which evidently turned out to be quite awkward for Babkarp. So he left.

It is up to me and me alone to finish this one and after a few sips of this Belgian Strong Ale I knew this one was a triple slam home run. Grapefruit, but not quite. A hoppy beer without the strong taste of hops. Malty goodness with traces of caramel round this amazing one. To top it off the lacing was there drooping down the glass sending me into a quadruple beer tasting orgasm.

Mikkeller, you make good beers, Ill be back for more. 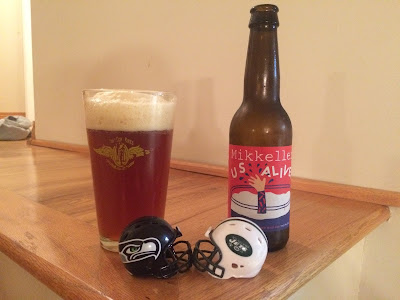