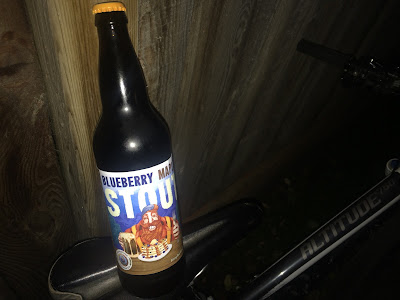 A return to a blueberry beer after a disastrous Friday last week which left three interns dead and our head beer pourer in a coma. Shit went down after the post was up. Shit I or any lonebiker Beer Friday  employee don't want to speak of ever again.

Let's just leave it at that.

Today was a much better day and I can tell you the riding schedule will improve drastically, you can expect the beer Fridays to happen on Thursdays and Sundays now as a new job came with quite the different schedule. A lot less hours than before which is A - ok with me. This Summer was a bit lame brained when it came to doing anything fun.

Today's brew from Douglas Michigan is from Saugatuck. A brewery that started in two thousand and four by one guy with one barrel by the name of Barry Johnstone and now is flourishing in it's home state of Michigan. Like most craft breweries featured on here they seem to keep expanding and expanding making one wonder... Is starting a craft brewery the way to go? All you need is a beard and some flannel clothing and you should be on your way right?

I among all the other staff were quite scared to do the pour. I'll admit this was a brave thing to do after last weekends tragedy of a beer review. One of the interns came up to me trembling a few moments ago and said he could not be here for this one. The pressure was just too much. I mean another blueberry brew after last weeks tragedy?

That's right folks, this is why I am the pinnacle of beer reviews for bike, beer blogs in the Beaumont Canada, Beau Meadow neighbourhood. No other blog come close!

Let's pour this one shall we...

The pour gave a dark beer that screamed blueberry and anger. How could those be a combination you ask? Don't look at me. Look at Saugatuck Brewery for they put this masterpiece together. The smell was the second sign that things would be ok. The first sign was the head that formed. Last weeks beer had no activity. The first sip was of strong blueberries and maple syrup. As a proud Canadian tears of pride rolled down my cheeks while drinking this one. Say what! This is an American brewery too. Well shut my mouth! A strong sense of malt also enveloped the taste buds.

In the end a great tasting beer loaded with taste. I just don't recommend a six pack as after one you will want something else. Not to take away from a great brew it is just a lot of taste for one sitting. Once you have one move on to something lighter. 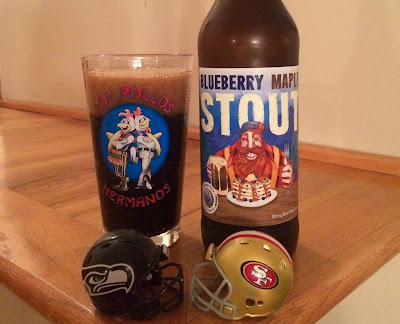