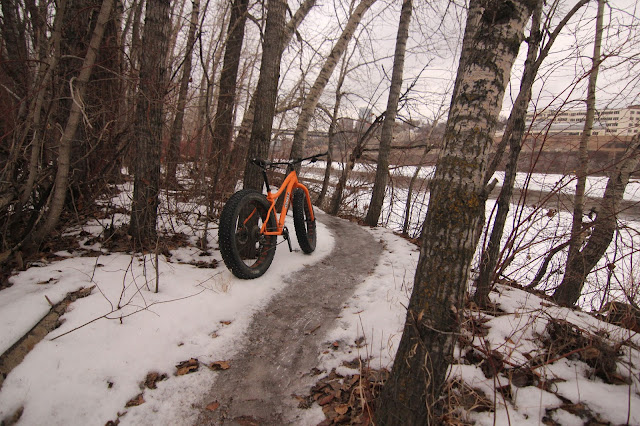 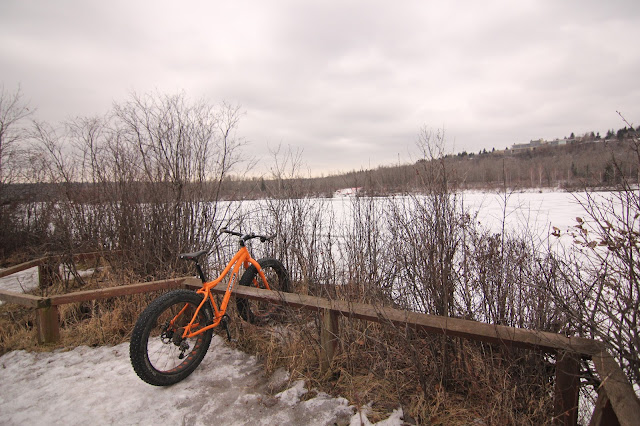 A skiff of snow sat on my driveway as I peered out sipping my coffee wearing my housecoat and promptly exhausted daily Seahawks slippers. 'Why theres snow!' My head exclaimed. 'Could it be a miracle?' Not cluing into the fact that it was barely a quarter inch if that. Most of it was blowing around and away revealing the brown underbelly of land below that we are calling Winter.

Once pulling into Kinseman I knew I could have kept the original planned bike. Aka the shitbike and rode paved with some multi use thrown in. The Fat bike was brought so I knew I had to try and ride trails.

The start came to an almost abrupt turn around as the city had closed the multi use from Kinseman to Emily Murphy. I grunted and laughed as I always do as I can be a bit of a pompous baboon at times when it comes to the city closing trails for dangerous reasons. I rode through and was instantly on the side walking up. The ice was treacherous. Thinking that's the worst of it I rode through the ice that is always there and luckily made it unscathed. Another ice section down the trail a bit was way too menacing and I walked around it. Even that was tricky because it was slippery.

Once through with my tail tucked between my legs I gave the city a pass on closing the trail. That was a good move. It's pretty horrible right now.

I crossed and entered Mackinnon and rode up the iced paved and took the easy entrance in to Laurier after riding through the residential where an inordinate amount of dogs were loose in the neighbourhood. It was weird. I smirked as I passed a postal worker sitting in his vehicle surely thinking this was the mail carriers apocalypse.

Some singletrack was hit in Laurier and a very frustrating failed self pic with the camera was also had. I crossed into Hawerlak and rode the multi use back where I avoided the Emily Murphy to KInseman multi use and rode up to Saskatchewan Drive and dumped back into the valley and rode Brew Master and Bohemian Maid (named from Trail Forks) and ended the day on a glazed up Canada Cup singletrack run.