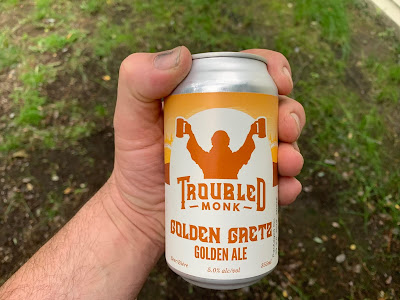 An hour and a half south of us (maybe 20 minutes extra or less here and there) lies Red Deer. Red Deer for me is always the halfway point to Calgary. Which means its always been a pit stop for bathroom breaks and quick food pick ups. A recent day trip when the leg issues started getting better showed me a whole world of surprises when we drove around Red Deer exploring things. "OMG, they have an Earls!" I exclaimed like the self entitled jackass that I am. Completely disregarding the lack of restaurants in Beaumont where the Lonebiker and his white family dwells.

This brewery opened up in Red Deer in two thousand and fifteen. A taproom is part of the flavour you get when visiting this fine central Albertan brewery which now that I think about it. I've been doing beer reviews on here close to ten years and I probably only visited a few taprooms and the visits were coincidental.

We poured and were given a beautiful golden ale which was what we were expecting. I mean the beer is named "golden." So we expected liquids of bliss filling out our beer steins. A short and feeble head tried to hang on to show its dominance but with no head, there was very little peacocking with this one.

The first sip was delightfully wonderful. Followed by more wonderful sips. It smells of doughy bread which reminded me of my childhood when my Mother would bake bread on a cold Winters day (sniff. sniff..) Once more consumed I found this well... I know I say this a lot but... The perfect Summer Beer! A good kick of wheaty hops with a touch of mini wheats with hardly any icing making this one delicious! Some would say much alike the ordinary Molson's of the world but I would say it seems Troubled Monk has figured out how to make a tried and true beer. 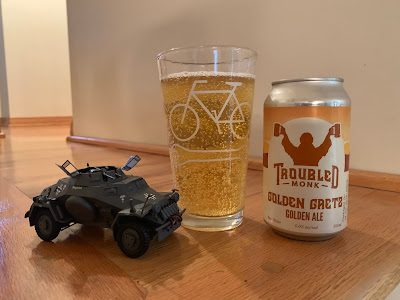