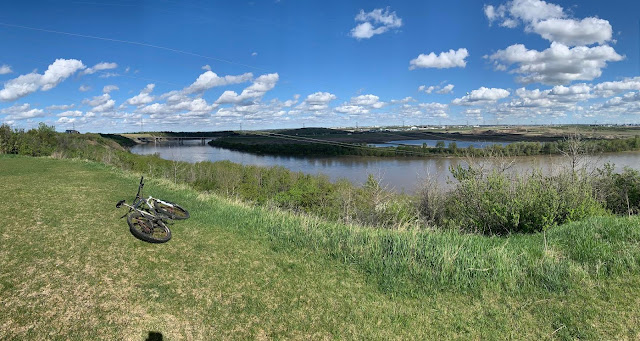 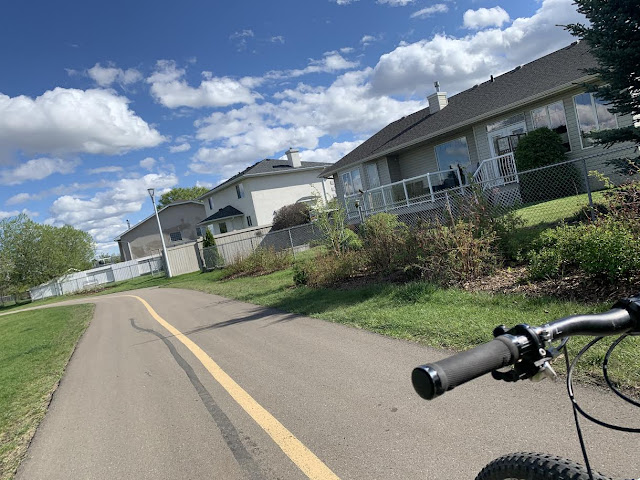 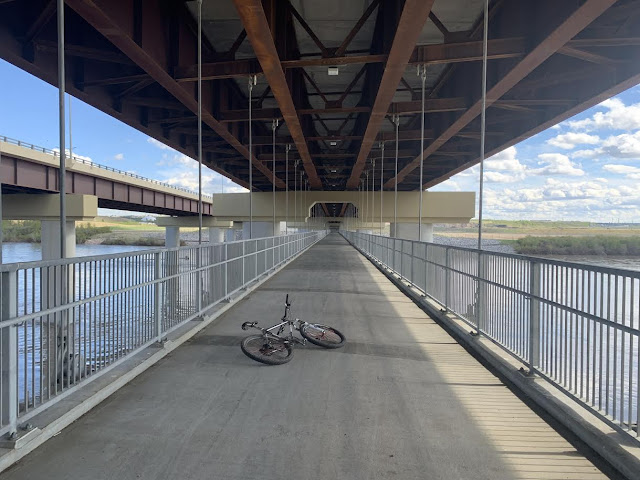 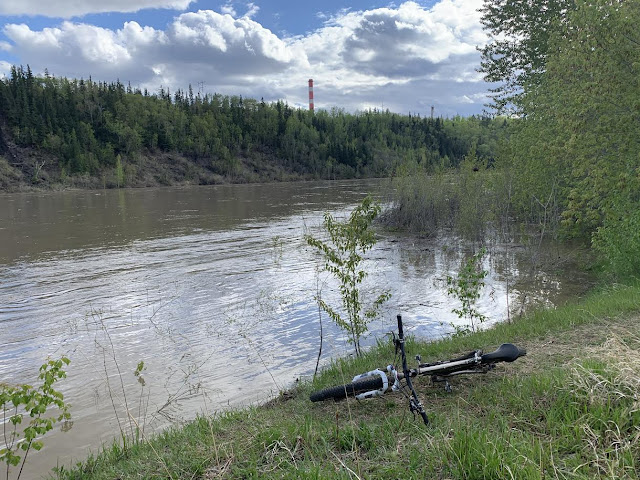 The wet weather that has descended on our area in the last few days forced a wet weather ride three days overdue. Coming off nights and the incredible fog that consumed me for the last two days was enough for me and the interns. Several had too flee as I came downstairs with bloodshot eyes and a weird limp smelling like burnt coffee and stale energy drinks.

I had to leave the house today.

The destination was the other end of the Henday. A spot that will make end to end bridge rides quite a bit more challenging but still do-able. This area has been open in the river valley for a while now and I haven't been yet which is quite shameful.

Goldstick Park was the start on a ride exclusively in Edmonton's north end where today old school road bikes were ridden in big numbers by guys in jeans and baseball hats. To get to the bridge I would have to ride through one of the worst dog parks in all the lands. I had ridden through Hermitage dog park on a ride that pre dates this blog and it was one of the worst dog experiences of my riding career. I was chased by countless dogs and nipped at by several where a couple landed bites.

This is the park that made be grow quite weary of dog walkers.

After rolling through the hordes of people in Rundle park thinking if this was any sign of what is coming up in the dog park it will be full on retard busy down there. I opened my maps and took the residential streets detour out and around the dog park. Yes I would take my chances with the mean Edmonton streets as opposed to those maniacs in the valley with pitbulls and dobermans ready to chase and bite the next cyclist rolling through.

The neighbourhood smells were a tad overwhelming and at times I had my nose covered under my shirt I'm sure looking like the worlds biggest douchebag. I can't help it. I'm white and live in one of the whitest communities in the Edmonton area. I'm sure the far left would yell 'racist' at this admission and hop on their soap box and scream loudly all in a virtue signalling attempt to get some recognition from their tribe.

If it helps. I rode by a Mcdonalds as well and covered my nose. That's a white person place, in fact it's white people's gift to the world. Heart disease and diabetes will consume north America but eat some other cultures food which is probably incredibly healthy? Gross!

We love you Mcdonalds.

I found the bridge and the valley trails and was smitten at the new paved running along the high sides of the valley. New homes with dogs that came and chased you along their fences lined the trail and it was quite great! I looked on the real estate app when I got home just to see how much it would cost to move there.

The bridge is a literal carbon copy of what is in Terwillegar. I'm pretty sure they just flipped the blueprints upside down and built this one. I crossed and did not explore much after that, time was short and I had to make my way back. I did try and go east a bit as private property signs were put up by the city immedietly after crossing. Pretty lame. Past the private property signs the trail did go on but it was quite crappy looking. As I crossed back another rider was crossing and took an eastward heading and didn't turn around.

The trails did look quite crappy. Maybe he knows something I don't.

The majority of the traffic comes from the north side of the bridge where I arrived. Including one Dad guy on a road bike who passed me on the climb up with authority but quickly ran out of gas and not bothering to move out of the way as I approached quickly.

Why do people do this? Seriously?

I had to pass in the grass, I gave him a "What the fuck dude" look which I'm sure never registered as he looked like he was quite gassed trying to climb the hill on his Costco road bike.

The ride back. Stupendous. Here is hoping for some trails Monday.