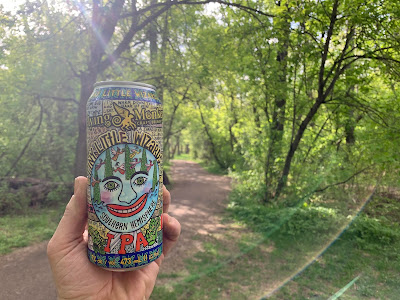 Beer Friday done on a Sunday? Well I've still got a few days off yet so lets assemble the beer team.

I hit the beer review assemble button next to my computer and I am expecting them shortly. They should be getting alerts on their implanted brain chips as I type this.

*Shortly, over the skies of Beaumont Alberta a black C-130 Hercules flies over inconspicuously at forty one thousand feet. The back door is opened and eight Lonebiker interns jump out wearing high tech squirrel jumpsuits fitted for oxygen and super high speed. Sirens fill the air as two black Cadillac Escalades roll through town at an incredible rate of speed running down children and old ladies all in the name of Lonebiker fitted with blue lights and sirens. Their destination?

The residents of this town are used to this charade. Yet, it usually doesn't happen on a Sunday. The ground shakes as below in a high speed stealth like tunnel boring machine sit the beer pourers. The one permanent and two on reserve in case anything happens to Ilga's arm. They are the first to arrive as they stop two hundred feet below the earths crust at Lonebiker headquarters. They exit the machine and dust off their pants and hit the elevator up button.

Just then eight small sonic booms from above happen. The residents look up and see the silhouettes of the interns moving at an incredibly high rate of speed. Captain America would feel ashamed next to these heroes. A hundred feet up they jettison their high speed chutes. Their chutes open and they land quickly in the quarantine area.

As they exit the quarantine the executives in the Escalades arrive as the elevator door opens welcoming the pourers from their bi-weekly dangerous underground journey. The interns, the pourers and the executives nervously greet each other for another round of Beer Friday.

Ilga poured this Barrie Ontario beauty into one of the fine tester mugs and she gave us a solid dirty golden brew tapped off with four fingers of go fuck yourself. This one had one hell of an in glass sitting look. "Does that make sense what I just said" I ask the interns. They look away like cowards. 'Typical'I thought. Not thinking of their heroic and extremely dangerous journey down to the beer lab.

This one was sexy, oh my lord it looked great in that tester glass. Not gonna lie, I had some kookie thoughts!

I could not find anything on this one on their website which was a bit annoying. I'm sure it is there but my desire to search websites has dwindled since doing these. The smell was an off putting fruity aroma. I say off putting but not in a bad way. We tasted and the old classic some say lip quivering IPA sting was not there in any way shape or form. This one has a nice gentle kiss of apricot that tickles your insides. Upon further sipping the IPA sting is there but is cleverly masked by great tastes of grapefruit and pulp from a mandarin orange. Overall its a nice sweet tasting IPA. True and blue IPA fans might find this one offensive. 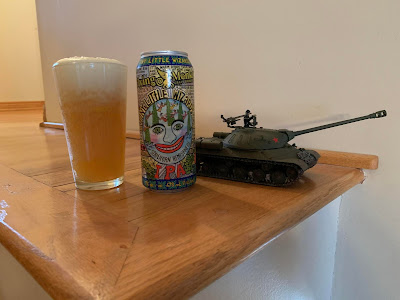