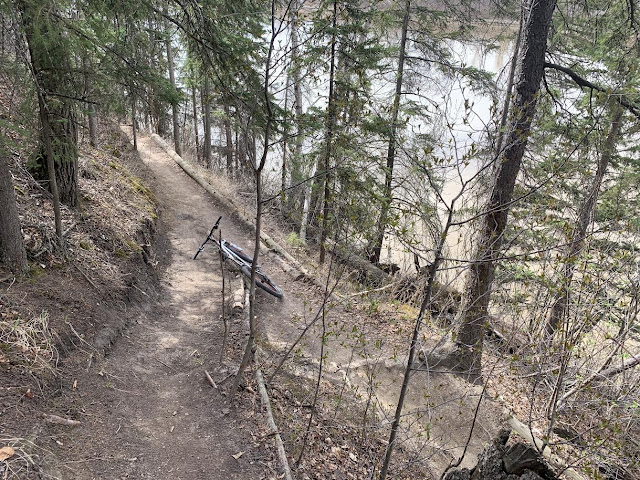 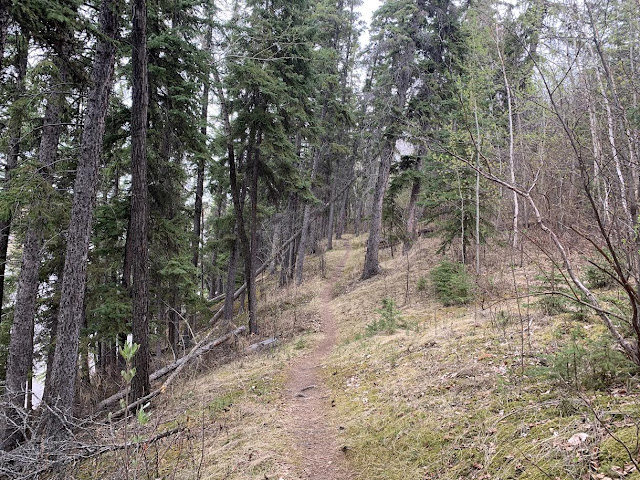 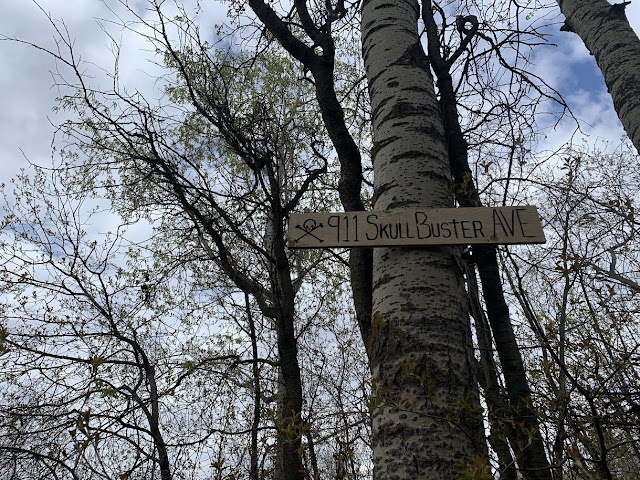 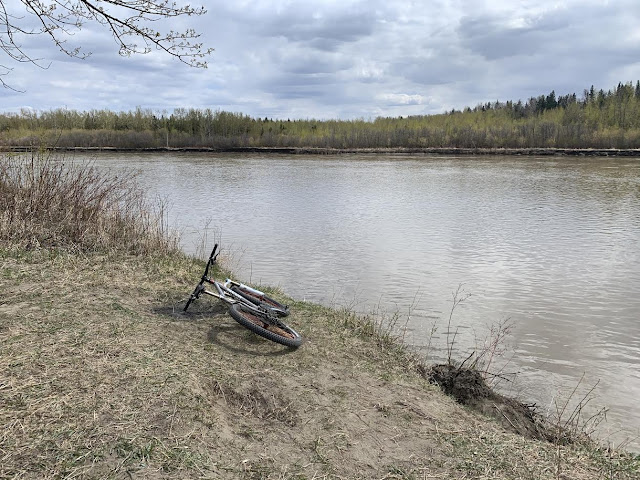 With the Moots middle ring incapacitated I was forced to run on the granny gear for most of this ride. I do have the big ring in this old school setup which is coming to an end soon but on these trails there are not a lot of areas to open it up in the big ring.

The last time I was in Fort Saskatchewan was in the winter and I started at the tennis courts and realized that nobody is riding the first section in the winter anymore. I investigated and soon found out all those wankers are just starting at the boat launch (the half way point) and riding the easier section out and back and calling it a day.

I was a bit leary of what  would find today as I started at the tennis courts and dropped into pure unadulterated singletrack bliss.

My tired legs came alive, like you know... For a granny gear ride. The Moots was incredible as per the usual, the air was perfect. The trails were perfect, even my snot rockets were shooting out at at an incredible speed and velocity with no drip down.

Then bam! Fence in the middle of the trail. 'Aw fuck.. Here we go' I thought out loud. Some investigating showed lots of traffic going around the fence. The signs said bridge construction as they are adding two more lanes on the motor bridge. A smart idea but sadly that's gonna fuck shit up here for a while.

I decided to not ride the trails and follow the poorly marked area around the fence given that it is  a Tuesday afternoon and there is a good chance workers would be present. As I was on the outskirts of the fence annoyed and pissed off at the lack of signs and info, I saw nobody was working and I crept in and soon found the singletrack again.

It is a ridiculously large area that they closed off as per the usual valley construction bullshit. It has to be idiot town councillors who approve of these closures with zero cares given because the area doesn't serve vehicles. Lame? yes. That is the way things are though kids and it could be a lot worse.

Everything is in prime condition now. The flooding that came through earlier was showing lots of signs of damage. I wondered how the low river trail section where the sketchy ladder bridges exist right before the boat launch had fared and when I arrived I was not surprised to see they were gone. Completely washed out. Aww shit. It's sad but the valley changes constantly so what do you do?

I climbed out and took the paved till the launch and was back on the trails again. Apparently the trails that most people ride now. The trails in that outer loop were busy for a Tuesday, lots of kids and families are out taking turns crashing on the ladder bridges and features that have been built up here. So a heads up if you are heading out there.

I had a coffee break at my once favourite spot in the world and booked her back.

The ride back was uneventful other than unexpected trail traffic. Once past the boat launch I was closing in on the construction closures and saw a newish? trail climbing up with a weird name insinuating it is very hard. There was a steep power climb but it wasn't that bad. A cool meadow like trail opened up and soon I was at the end with a decision to ride out and avoid the whole area or skoot down a steep downhill that the local kids (I'm assuming) put up a sign  labeled '911 Skullbuster AVE' (in pics.)

The downhill was steep but it was very rideable. I was tempted just to spite the sign but I had already had it in my mind to take the detour through gross residential and paved trails.

I took the detour and soon found myself back where I started at the tennis courts. This construction may have me parking at the boat launch in coming rides although every fibre in my being does not want to. I could ride the north east trails first as an out and back. Hell... Maybe someone from the parking lot will see someone go that way and be enticed to follow.

Fort Saskatchewan can be ridden as a skinny figure 8 from the boat launch where all the trails can be ridden with no issues from the bridge construction. I don't like that idea and will probably keep parking at the tennis courts.

Cause you know... Change? Hell no. 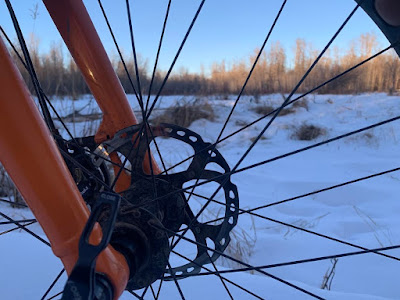