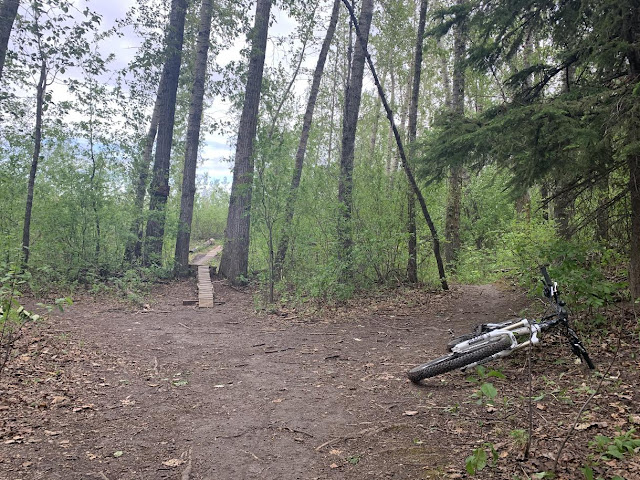 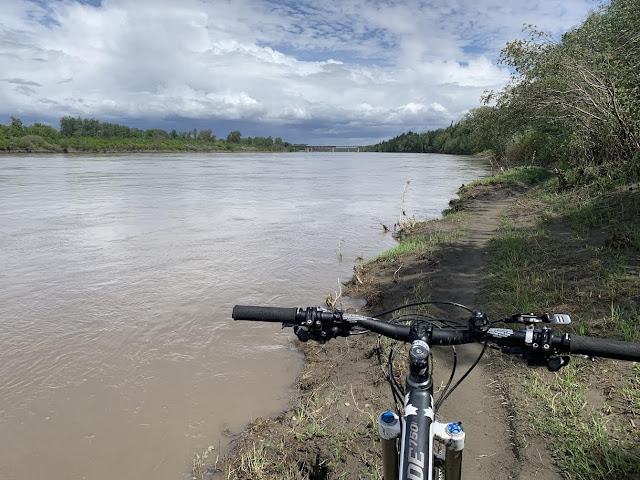 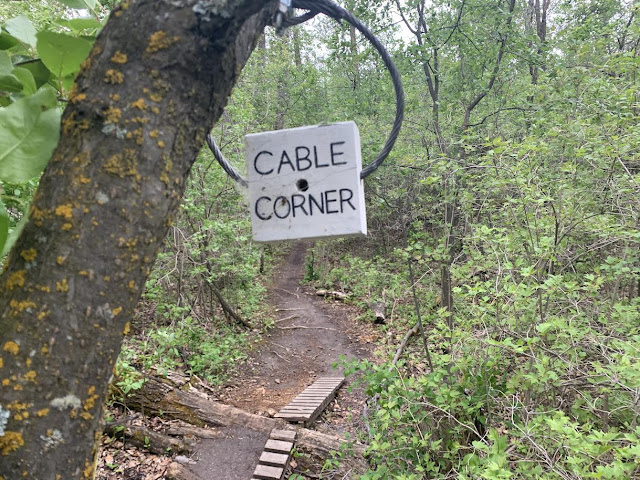 Time off began a bit early today as things are slow so we took an extra day to kick start days off for a week that coming up sounds like it will be quite moist.

Fort Saskatchewan was the choice to kick off another week as it is nice and easy to ride and I am old and quite tired from work. Panic set in as I was halfway driving there and I didn't think of the weather, or previous nights weather for that matter. This could have been a big waste of time and gas heading out there. A text was sent to see if I was fine.

'It rained' was the reply from Mrs Lonebiker. I decided to keep heading that way and would ride paved trails and around the neighbourhoods if I had to. Lame yes, but better than not riding.

The boat launch was the starting point, first time I believe starting in Fort Saskatchewan in that spot and I did not like it one bit. Turner Park will be avoided until this bridge construction is finished. I took the easy route for the first loop. All was good, the love and hate relationship continues with the Altitude and today we were both in mediocre moods. A found the new, well newer trail that by passes the jump section where the trail splits to start the loop.. At first it looked brand new, like last Fall but as I rode it seemed to improve with age. It was all win as it has potential for lots of fun plus there is a teeter totter and other ladder bridges with jumps and such.

I am sure somebody somewhere is face palming reading this knowing the exact age and origin of this trail but you go ahead and face palm. I don't care. I discovered it now for me. Well it wasn't a huge discovery. It is pretty evident where it started.

I passed the boat launch and rode the hard section. Well I call it the hard section as it seems people are avoiding it. The trail does end now at the bridge due to the construction, the older part of the trail is now a sad sinkhole and there is a new trail leading out of the woods.

In the end, a fine ride just annoyed at the changes, the original out and back loop was perfect. The ride is now short 4 kilometres making todays ride quite short. I thought of doing the easy side again but time was not on my side.

Next time here, the figure eight should be ridden twice or it just isn't worth the drive out. Trail conditions as of today were fine. Puddles existed but were not a problem. Incoming wet weather will change that soon sadly.