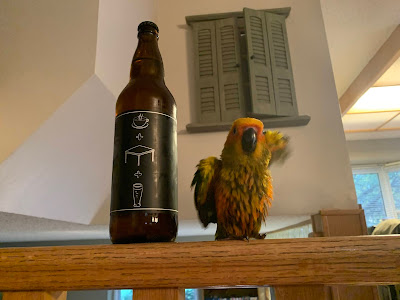 We return after a few weeks of non beer related activity. The interns are on holidays in Spain last set off. That's right, myself and the management decided now would be a perfect time to travel as the travel industry is in shambles right now all thanks to Covid. Ain't it great!? A year ago I would have been paying an insane price to send my staff on a nice holiday but with covid booming again it was a mere 3 for 1 on the tickets so I knew I was a fool not to send them!

From what I heard they are confined to their hotel rooms and were not allowed to leave for two weeks. So two weeks in the same hotel room with Netflix and endless internet to roam!

Russell Brewing who are located in Surrey, British Columbia have quite a few beers in their lineup and started business I believe in 1995. Is Surrey to Vancouver the same as Sherwood Park is to Edmonton? I do know a quick map check will answer the question but I'd just sooner as you guys...

"What!?" I bellowed... "Oh yes." Quickly realizing my folly. That intern was quickly fired and escorted to his vehicle.

Much akin to surprisingly many of these beers it could not be found on their website which is a tad frustrating. I don't get why these breweries put out beers and have nothing online. Hold on... Am I looking at the wrong Russell Brewing? Is there another out there? Nope. Well, I don't know. Lets pour.

The Hardcore Bikes mug took this one and we poured a dirty golden coloured beer that did turn up the interest. From what I found on the interwebs is this is a light easy drinking beer. Smells of.... Well shit. I can't smell anything. Maybe I should go for a covid test? Damn...

I'm kidding, this one has light smells of bread with a very light coffee smell. Coffee? I like it, it goes well with the theme of the coffee table beer. It tastes what it advertises (well there was nothing on their website so this is based off other opinions on the internet) it tastes like a very easy drinking light beer. This one is easy to consume quickly. Notes of light coffee oddly with some sort of mix of chocolate? It is like it got sone sort of Nestle Quick treatment but the chocolate is much better. Like a beer commercial from the early nineties. It's nice and smooth as it goes down!Some lacing stays on the side of the glass as it goes down as any good beer should. 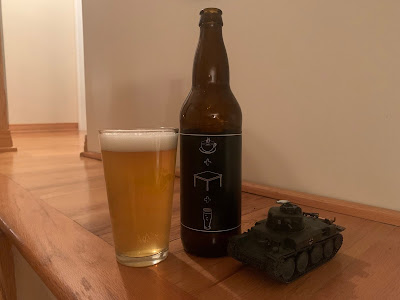