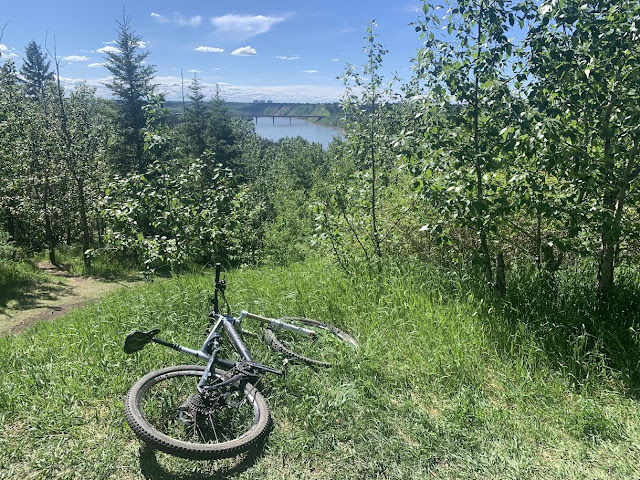 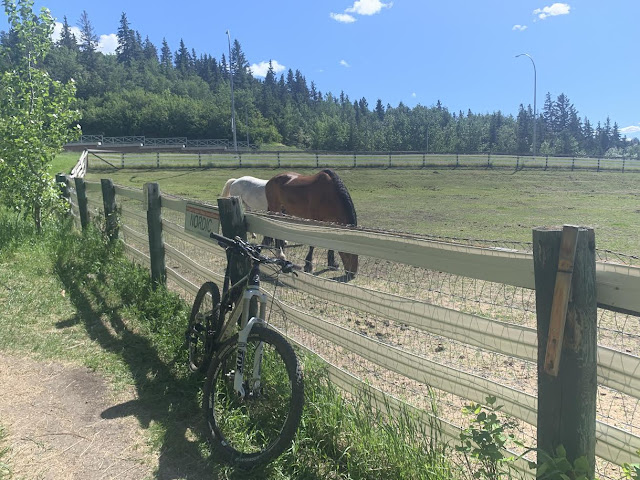 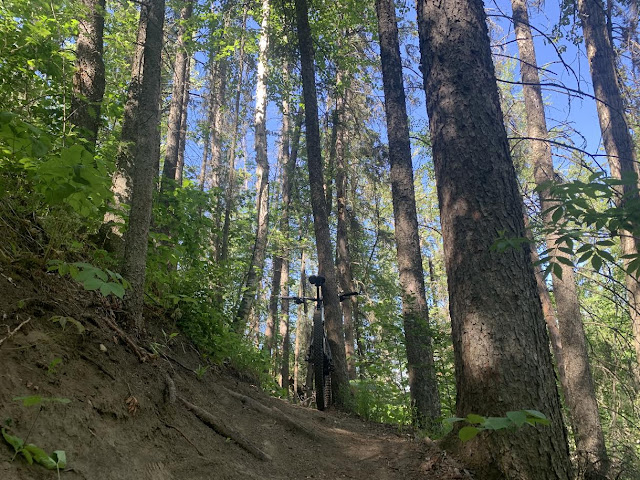 It was three shit rides in a row that prompted some emergency meetings with the executives to try and figure out how to right the ship. From what we determined a twenty five kilometre minum ride was to go down today in was what we imagined would be a very busy valley. A twenty five km ride would only go down if I slept in so no alarms were set and I woke up fresh as a bruised cucumber (I didn't feel 100%.)

Yes it was stupid busy as I thought. I started at Strathcona High School and rode the bike lanes to the End of the World area where 7up Hit Up would be taken down and it all went to plan. Nobody was encountered on the trail and I rode along the stables happily thinking things would be terrific.

Then I entered No Horses trail and had a head on collision within the first 15 yards. It was a minor bar end clip but 10 yards later a group of ten walkers were there, the trail was chock full of people at every corner with a generous mix of people with cyclists, walkers, runners, dog walkers, bird watchers, swimmers, sun tanners. There was even the classic douchenozzle guy with a loud radio affixed to his back for all to hear. These guys always look exactly the same, heavily tanned, goofy sunglasses, no helmet cause that might ruin the mullet (not always a mullet but today's hero had one.) An older hardtail mountain bike with bar ends pointed straight the fuck up. Yes, jeans and a bright yellow muscle shirt made the incredible completion.

He was no douchebag, he was my hero.

I'm not kidding, that was the wide swath of people I encountered down there and I knew I had no choice but to ride the hard trails today.  That might make the 25 km goal hard to reach.

I get it. People need to get out.

Selkirk Knights kicked my ass in a weird way. I rode up some of the steeps successfully and others had incredible awkward feeling spin outs and poor line choices. Oh and yes... Not much gas in the tank.

I crossed the Fort Edmonton bridge and was wondering if  Axe body spray was holding a convention on the bridge. I have never seen so many well tanned neck tattooed people in my life. I knew Oliskew was out of the question as one guy sitting shirtless on a Santa Cruz bike shirtless, heavily tattooed and lighting a cigarette made eye contact with me at me like he wanted some sort of bike off or something.

I rode on by with Purgatory via Clamland in sight and enjoyed the on the bike off again relationship I seemed to be having with the trail. The groove was getting good when suddenly my rear derailleur crapped the bed forcing a walk out to the paved paths.

I was able to limp back but had to call in for a ride at the zoo.

A shitty end to a ride but it was still pretty good prior to the Rocky Mountain doing it's thing again.