On another fubar set of days off with zero rides happening and zero beers reviewed up until now we are bringing you Born Colorado brewing from Calgary. The owner was born and raised in Colorado and started his brewery in Calgary or at least that is what my best guess is. I thought I saw something on the interwebs that shed some light on the origin but I did not pursue any answers.

Normally I wouldn't really care about the owners origins but the name of the brewery makes me want to seek out the answer. I mean.... 'Born Colorado.'

Could I seriously be this bored from lack of riding?

Tomorrow is my first full day where I am free this set off, the plan is to hopefully ride barring the smoke. If you are not from around here wildfires burning in Saskatchewan and British Columbia have blanketed Edmonton in smoke making things a tad unpleasant. This smoke is annual Summer tradition that comes around every Spring and Summer. Poor night rotation recovery could be the one thing that brings down a possible ride.

Yes the owner was born and raised in Colorado and moved to Alberta in twenty twelve.

We took to the beer pouring room and Helga poured an absolute beauty. I thought light right from Heaven was shining on this one but I was informed that it was because one of the interns left the bathroom light on and that was reflecting off the beer.

It smelled of a bready, doughy malt and  kept what was remaining of it's head in a thin layered seductive way. There was something in the air when I leaned over and had a sniff and I felt like we had an instant connection. Could our neighbours down south who were not born here have a winner in our stables?

This was a pleasant one to have and would be the perfect companion on a summer night such as this. A few more sips in I could not find anything that jumps out at you with this. For this style it does seem very average. A bready like taste with mild hops and finishing smooth like Leonardo Dicaprio's cheeks in What's Eating Gilbert Grape.

In the end. It's fine. I won't seek this one out like I have with other previous review beers. 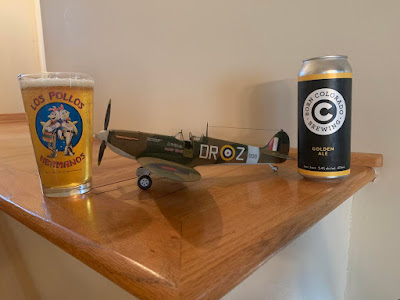