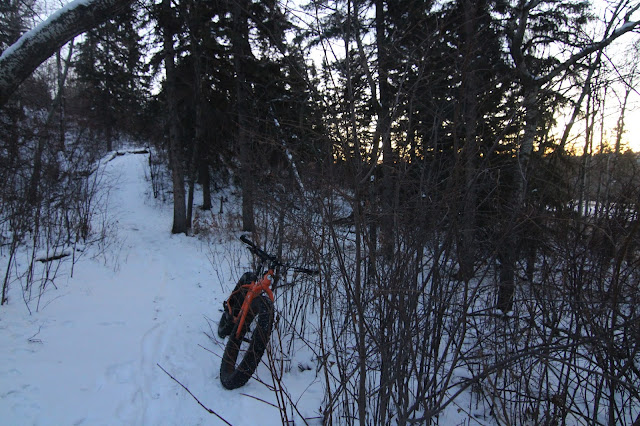 One that had a bit of promise as I arrived, wait no I did not want to do this again. With Kent cancelling a meet up I almost left but figured I drove pretty much all the way.

It was a top of the valley start by End of the World. I headed eastward with plans on riding Ray Gun and Silver Fox down and then playing with my lady Victoria and the Groat Road Rollercoaster. I entered RayGun and was soon slapped around by the shitty conditions. I dropped the RayGun out of this section and just took Six Shooter down most likely at an alarming slow speed. The entrance to Silver Fox seemed decent so I started riding and realized it was much worse than Six Shooter was. Very loose sugar snow had me at whits end and I climbed out via the stairs.

I thought Edmonton was full of hard as fuck fat bikers? Where are they?

I guess I should have stayed and done my part and tried to ride it but the thought felt futile. Also no I am not hard as fuck as I wanted no part of that shit singletrack tonight.

It was a ride into the dark where I lost all sense of mojo where I cowered and rode home with zero energy. A shitty end to a shitty ride.

Could be the last ride this set off unfortunately kids...