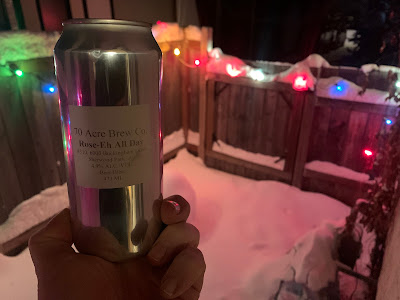 A day spent Christmas shopping is best coming home and having a fine craft beer. Conditions outside are quite terrible right now with extreme cold and very icy roads which have turned the city into chaos. Are people driving that much more slower in these conditions these days or have I just never noticed it?

Yes I drive a Jeep so you are probably thinking I am one of those Dodge Ram types that rips it up in his four by four tailgating cars and such but no, you are wrong. I do get quite annoyed at the people doing fifty km in the fast lane of some of the freeways which is quite dangerous. With more shopping needed to be done I am not looking forward to heading in to the jungles (malls) to do my thing. It was something I once oddly enjoyed. I do like getting family members stuff but between driving and shopping at these malls it does wear a person down.

Kent gifted me a bunch of beer from 70 Acre Brewing which is why they have been making a lot of appearances. So far their beer has been knocking it out of the park. It was the lack of a decent website and throwing everything over to Facebook which was the one thing that annoyed me about this brewery. A quick check on their website shows it is still the same. No, I am not joining Facebook just to follow these guys which is what irritates me as they don't see the possible loss in customers as lots of people don't have social media accounts.

The pour went awry and a ghastly eight figure head appeared. Immediately the in training beer pourer was shown the door and we are now out of reserves. So if you are looking for a job it pays 160k a year with a company Tacoma and you only have to work twice a month for an hour. You must be able to show excellent wrist retraint when pouring. After the debacle we sniffed and a fruit like hop hit you with what one would call a dark cherry? Kinda hard to discern, maybe the sips will tell me more.

A definite bite of strawberries and what I was getting mixed with liquorice.A dark fruit essence emits itself in the mouth. A nice dry beer which would go much better on a hot July day as opposed to our -28 or whatever it is.

Their website gets 0 gigabytes out of 5. Ha! No I will never let this go. Get a proper website guys.