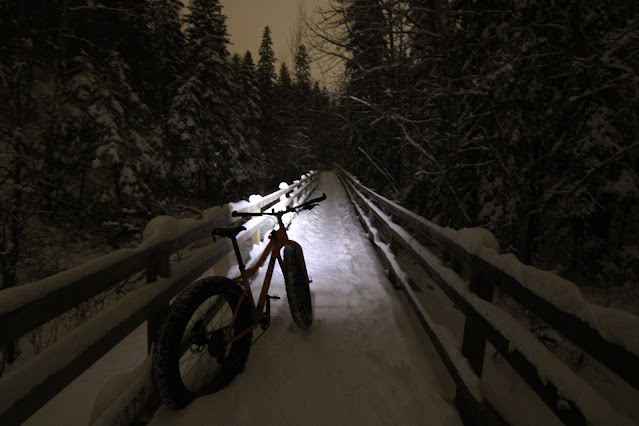 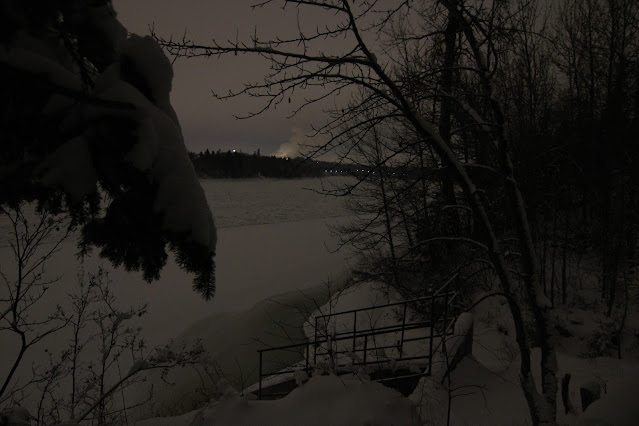 A splendid ride that went a little further than expected from the top of the valley on Saskatchewan drive close to End of the World. It was supposed to be a ride into the dark ride but I was late getting to the trails and it was dark by the time I got there.

Dark? Well, Winter dark. So kinda light but not really.

it was good to ride with no lights except on the singletrack. Although near the end then my lights died for good I wished I had them trying to navigate my way out of the Hawerlak area via the multi use climb from hell out, brought to you by Satan himself.

Well, there are a lot worse climb outs around the city. Tonight kinda sucked in the dark is all. Plus I swear I was getting stalked by coyotes.

The initial plan was to ride down to the valley banks on the no horse trail, cross Quesnell. Laurier and return. An annoying male version of a Karen made an appearance in gasp! Guess where.....?

Yes it was quite odd as he stopped me. I had headphones so I awkwardly tried getting hem out promptly despite being covered in heavy Winter gear. I thought he was letting me know something important about something up ahead but he was just very eager to tell me I was riding an illegal trail. I was more annoyed at the fact that the he had to stop me despite us being the only two people in the whole park.

A busy Saturday and weaving in and around people like a jackass would warrant a talking to. Barely plodding along on a fat bike where speed walkers and joggers would blow by me and feeling the need to stop to tell me that? Pretty fucking petty dude.

With things going on I was perturbed prior to the ride and I ended up calling the guy a male version of a Karen and I offered to get him the manager of Laurier.

I think that really pissed him off and he stormed away.

Incidents with twits usually hang around the mind for a bit and I pressed on towards the boardwalk and long easy climb up and out to the throat of Mackinnons sweet singeltrack. Things were prime for Winter Riding on Root Canal. Back Breaker... oh wait? The whole second trail after the bridge isn't called that is it? Yes it is as according to Trailforks.

It seemed like people avoid the rough middle as most tracks disappeared with the exception of some walkers and another poor son of a bitch on a fat bike. Oh shit, there I go talking all rednecky again. The climb up was walked after nearly dying on the switchback as the previous ice still exists which hurt so many people hiding under the fresh snow.

I hit pavement and contemplated the return home. I was tired and chilled. I thought if I go through Emily Murphy I could Silver Fox and RayGun  it up to the top! I mean a pretty fuckin badass way to end the ride. I did think of the possible conditions and it could be hit or miss with people riding and it could have been a not so fun experience like going to a Travis Scott concert.

I chose the multi use with the first available staircase up on the Belgravia Access? multi use. Once I saw the only staircase up I chose the hell climb up and my lights died and the coyotes started circling. 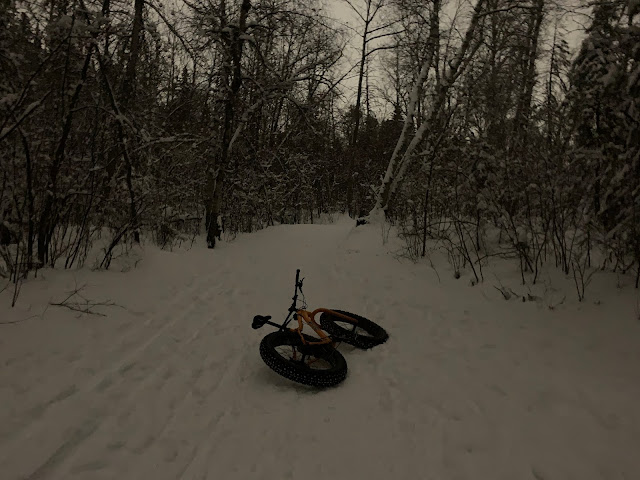 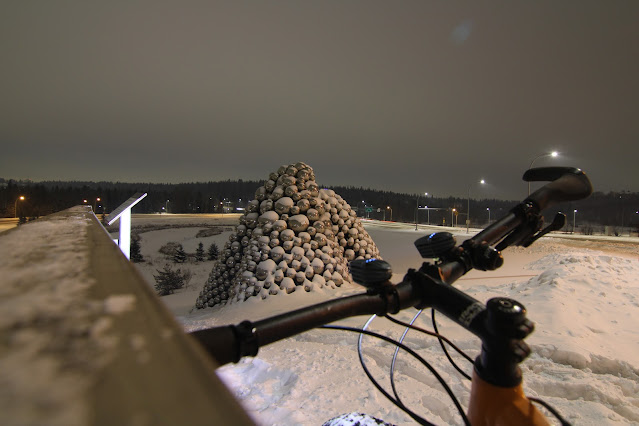