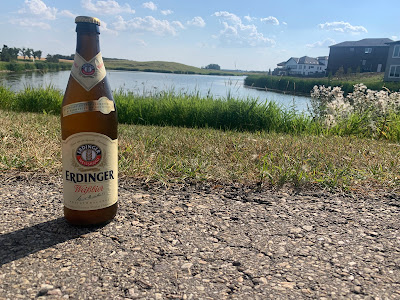 Beer Friday done properly on a Friday two times in a row to make the executives happy.

It's still hot as hell outside and I am starting to get a little tired of it as a local ride attempt happened today which was a dismal failure. I could blame the weather but I ferried my fat self quite well over the Fort Saskatchewan singletrack just yesterday.

Thats right thats the badass singletrack that needs signs along the side of the trail to direct rescuers to your location.

Oh I am sorry I just need some more validation on how badass I feel I am cause I ride bikes. I mean I almost hit three km's on local Beaumont paved trail! The whole intent was to get a beer picture so…

Let's pour, I have nothing to talk about and it's showing.

Erdinger opened in eighteen eighty six in Erding Germany. We poured this beauty into the Hardcore bike mug and it gave a dirty golden beer with a massive head that was blamed on the pourer. He was shoved out a side door and beaten promptly as anyone should have been.

We tasted after a fine sniff which gave us very little to discern from. After my fifth attempt I would say it smells like a high school stairwell with traces of bubblegum from a former passer by. It tastes like a fine Hefeweizen should. It was sweet and fruity. Slight citrus tastes sneak in there a little bit as well as a wheat tone. This beer was a delight to consume as I sit here and watch Seahawk pre season football. 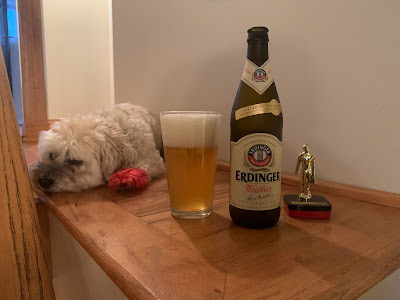