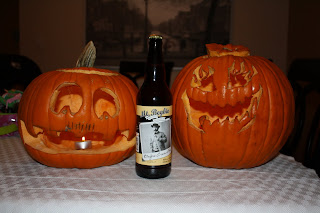 Revelstoke , British Columbia . Home of some of the best riding around this cute little planet of ours . One thing that goes hand in hand with riding is beer . There is nothing better than after 60+ kilometers in the saddle than enjoying a fine glass of suds .
Revelstoke is where Mt Begbie hails from and tonight I purchased Begbie Cream Ale . Damn ! this is good stuff ! coming from a guy who knows nothing about reviewing beer (see October 23 post)I don`t really know what to say except that I like it ..............................really like it ! It does have all the attributes I learned from commercials like it goes down easy , no bad aftertaste , ya know , all that crap ! It does have that cream soda flavour to it with a hint of honey ...............o.k ,that last part was printed on the bottle but give me a break I`m an amateur beer reviewer and that`s what we do .
With six beers in the Mt Begbie lineup , I`ll be anxious to try more !
at October 30, 2009