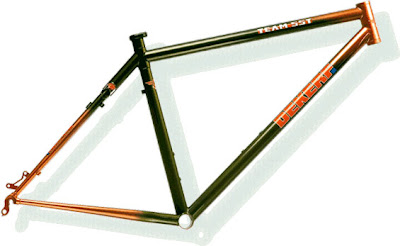 O.k , I`ll admit I`ve been lusting for one of these for well over ten years now . The Dekerf team frame is one of the most beautifully crafted bike frames ever made ! Handbuilt in Richmond B.C founder Chris Dekerf has been welding bike frames longer than Michael Moore has been annoying those poor Republicans (well probably alot longer than that)


The frame pictured here has pretty much remained the same since it`s inception around 1993 . Originally called the Dekerf Mountain . Made of steel since day one , these frames will easily outlast you . The current version is made of reynolds 853 tubing . One of the coolest features is the pierced monostay assembly pictured below which is a good way to show off great craftsmanship . It`s easy to say you won`t find this on any other bike !


As I said before this frame has pretty much remained unchanged from day one . In 97 it had the biggest changes when they switched to reynolds 853 tubing from ritchey tubing . There was also changes to the dropouts . Other than that a Dekerf frame from 95 would look pretty much like one you would but today , and that is super cool . Yes it is a hardtail and you wouldn`t think that there could be big changes but look at companies like Giant and Rocky Mountain . Their hardtails go through more changes than Madonna . Dekerf like Merlin , Moots and other high end frame builders stay with what works .


I haven`t seen too many of these in the river valley in the last few years , whereas they were a little more common earlier (o.k I would see maybe three a year if I was lucky) Whenever I see one though I get very excited and want to scream DEKERF ! When I`m driving and see one I do scream and just about crash into other cars because I can`t stop staring ! (just ask my wife , it`s a problem , I get way too excited when I see a nice bike)

If your lucky enough you can pick this frame up for around $1500 and believe me , it would easily be worth every penny . Maybe one day I will pick one up , the only problem is my wife would leave me (and I`m really starting to like her) Also seeing as how I got my dreambike this year I should be good for life right ? ........................Lordy Lordy , I have an addiction ! At least it`s not heroin ! 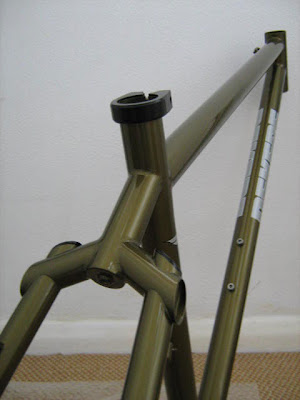