This is now the third year in a row that the good season has lasted into November with more mild temperatures today and I got to ride in shorts ! Lets hear it for global warming .........Hip Hip Hooray !

I seriously underestimated the amount of sunlight I would have though and ended up coming home in the dark again ! That`s getting all too familiar these days , what`s worse is I had planned on doing the loop twice today and I barely got one loop in . The ride today was a definite gooder (is that a word ?) I had found some bike mojo and railed that sweet singletrack like I was Ned Overend (o.k not that good) It was amazing though and I had a few out of body experiences which you would understand if you rode a mountain bike . The guys who ride reading this understand .

The only thing I found a little annoying was the amount of "trail traffic" . It`s November 7th and this is the busiest I have ever seen it ! What`s the matter people ? It`s Saturday , did they close Walmart and Costco ? Most of the people were hikers , trail runners , and a guy with an extremely annoying dog . There were four other bikers and yes there was a Mojo sighting .

Could this be the last ride on dry Ft Saskatchewan trails for the year ? It felt like it cause it was that good ! 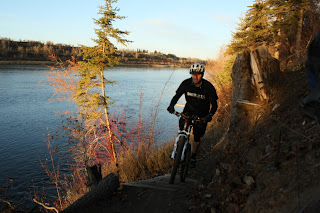 doing my best not to fall in the river 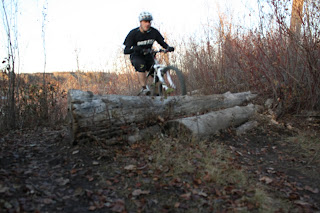 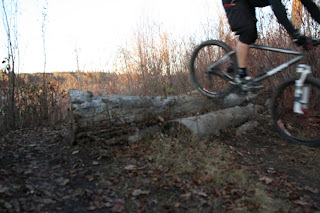 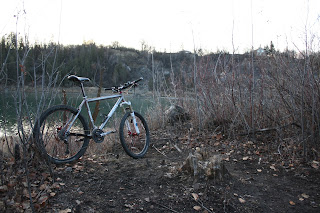