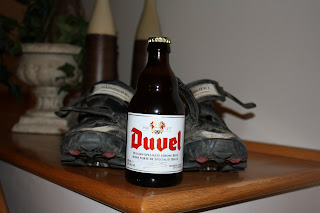 Duvel , from Belgium was born in 1871 , the year Orville Wright was born . Ya just can`t top a good year like that now can you ? Orville and his brother Wilbur used to own a bicycle company and did some other things ..........I can`t quite remember now , maybe it will come to me later . Back on track here Duvel is in Breendonk (careful how you spell that) , Belgium . The beer I am reviewing tonight is their flagship beer which is also a complete badass mofo of a beer . Why ? 8.5 % , that`s why . You see people this is what you call a "man beer" . All you little "girly boys" drinking your Coors light , or Bud light lime can go back to your Barbie houses . To the women who drink Duvel , I have one word  .......Respect .

I was a little scared to try this ..........OH SHUT UP !!! but sucked it up and opened the bottle anyways . The smell was not too scary . I was expecting that bitter smell that you get with alot of European beers but it was a nice pleasant Malt , and that made me happy . The taste was not what expected as well . It was alot better then I expected . For a beer with a high alcohol content it did not taste like a mix of rat seman and snake urine like so many of those beers taste like . I was happy with this one , really happy  (yes I only had one). Try some , but be careful . This stuff can probably bite you .