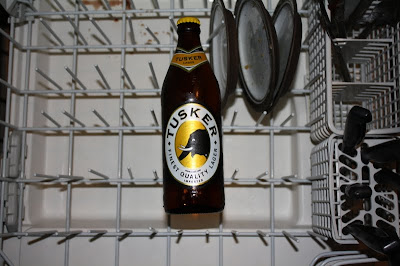 A first for Beer Friday! A beer from Africa... Or so I believe one hasn't been on here. After that disaster of a review last weekend I'm super pumped on getting back to the beer, and to get one from Africa. Sweeeet! My special lonebiker beer fetcher boy scouts went out and did their homework today and got me a gooder.

Tusker, from East African Breweries in Nairobi, Kenya. A land that so many people want to visit but probably few have was formed in 1922, a rather late year compared to lot's of the brews that were formed in the early or late 1800's. Tusker is one of the breweries main beers and came to be after one of the founders was killed by an elephant in a hunting accident. A rather rough way to die in the outdoors I would think, but yet, most deaths in the outdoors would probably not be too pleasant. I mean really. When you think of it. Why do I have to be so dark sometimes?

The pour showed a lighter golden brew that showed little head which reminded me of my balding spots. The head dissolved quickly and I thought the beer was making fun of me, so after a lengthly discussion, me and the beer made up and I drank it. The taste was very much common of the Bud lights, and Coors lights of the world but a little bit more watered down. At 4.2% it is what you can expect. With the exotic factor coming on strong for this one. I was hoping for more. 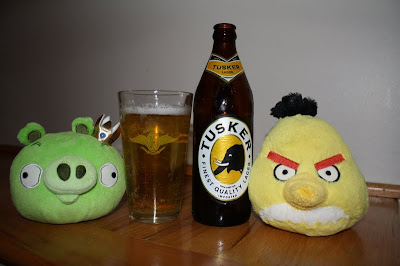